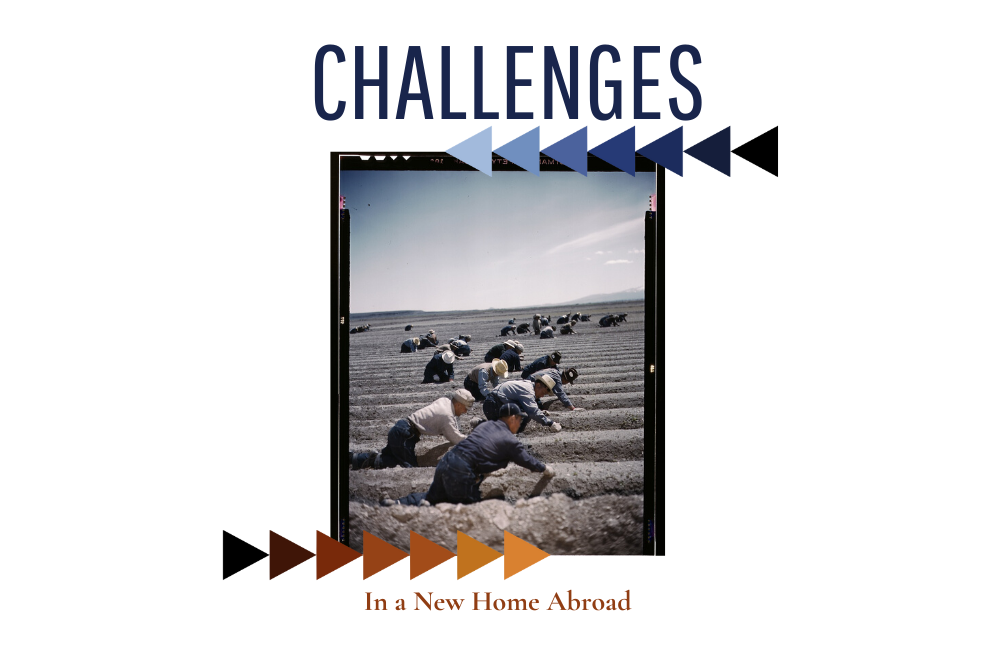 ...our diverse loyalties are much too strong to be erased by a regional identity and our diversity is necessary for the struggle... It is even more necessary for those of us who must focus on strengthening their ancestral cultures against seemingly overwhelming forces, to regain their lost sovereignty.

—Epeli Hauʻofa, from “The Ocean in Us” in Culture and Sustainable Development in the Pacific 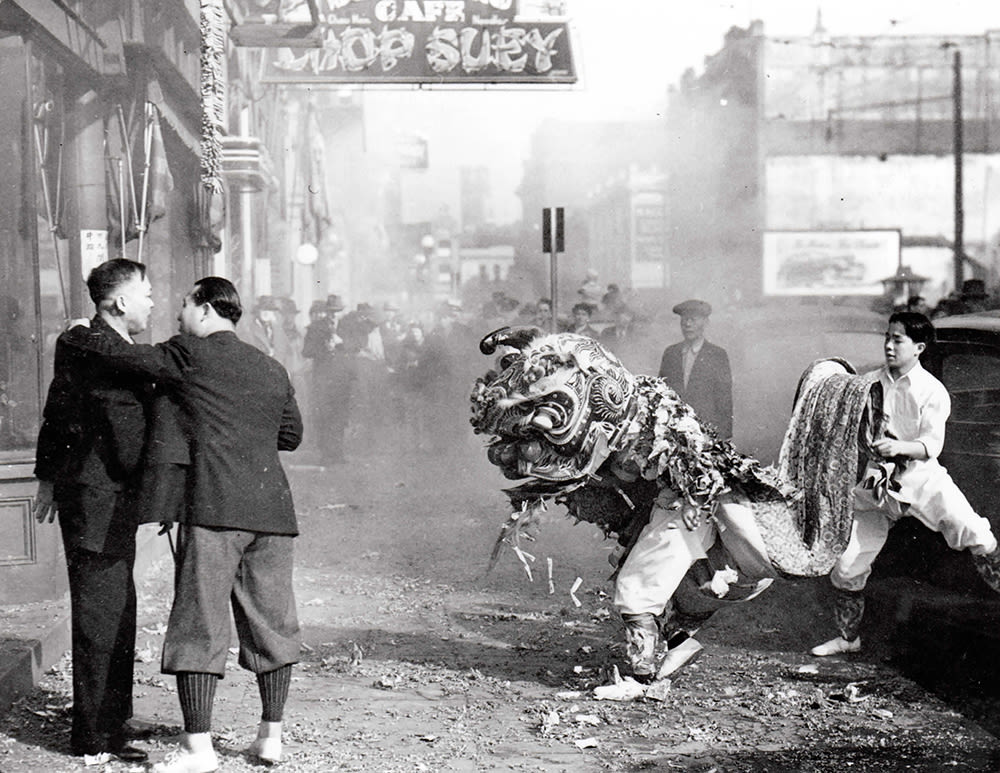 Traditional lion dancers ring in the 1939 Chinese New Year in Portland’s Chinatown district. Vibrant celebrations with food, music, and performances were vital to maintaining the community’s connections to each other and their shared background.

As new, non-white immigrants to the American colonial system, many of the communities that found their way to the Pacific Northwest by way of Hawaiʻi faced similar challenges and prejudices away from their own homelands. These newcomers—particularly those of Native Hawaiian and Asian descent—were barred from partaking in the same employment, residential, social, and political opportunities enjoyed by their white counterparts.

From the explicit boycotting of Asian labor and immigration to unfair taxation and wage disparities on the basis of race, to the violent and forced expulsion of non-white communities from rural towns and widespread prejudice—one of the greatest challenges faced by these Asian-Pacific Islander immigrants was the systemic racial discrimination they experienced on a daily basis. 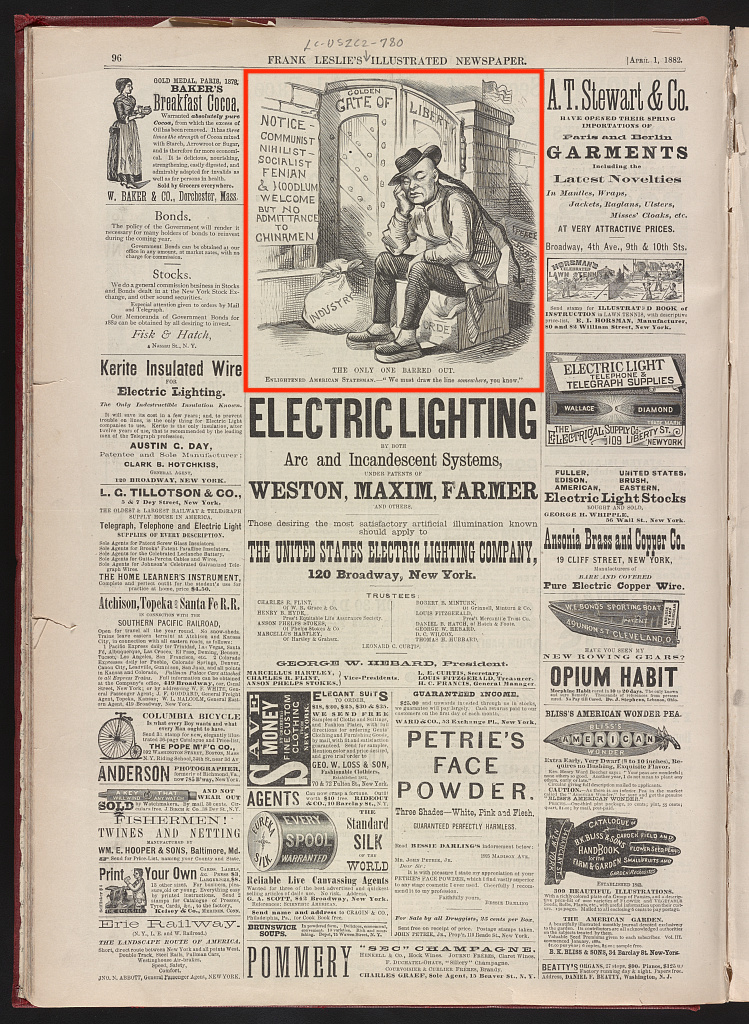 A page from an 1882 illustrated newspaper comments on the recent Chinese Exclusion Act, depicting the Chinese community as “the only one barred out” of the United States [cartoon highlighted in red].

Select timeline of discriminatory laws and regulations in the Pacific Northwest and United States:

1844 — Exclusion laws in Oregon Territory ban Black residents from settling in the region. This affects some Kānaka, who were sometimes seen as and documented in official records as Black due to their complexion.

1862 — Rising tensions in Oregon lead to a $5/head tax ($126 in 2020 value) placed on all non-white residents. Failure to pay this tax resulted in forced labor to fill the charges. In the same year restrictions are established against interracial marriages between white individuals and anyone more than 1/4 non-white ancestry (Black, Chinese, Hawaiian, or otherwise) or more than 1/2 Indigenous ancestry.

1882 — The Chinese Exclusion Act bans new immigration and naturalization of existing residents of Chinese ancestry. It is made permanent in 1904 and remains the law until 1943.

1917 — The Immigration Act of 1917 designates many Asian and Pacific Island regions as ineligible to enter the United States, with the exception of the Philippines (stolen as US territory after the Spanish-American War). This legislation was in place until the Immigration and Nationality Act of 1965 struck it down. 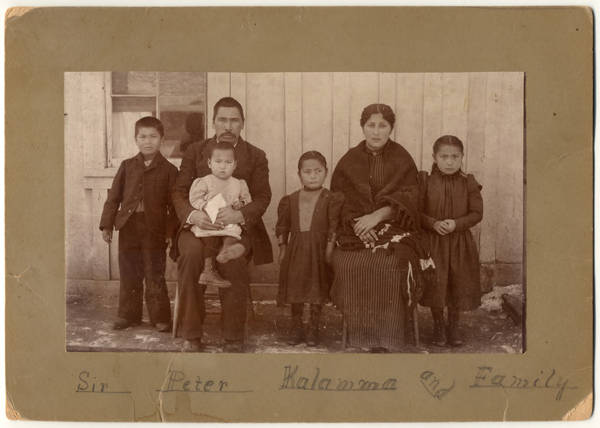 This portrait is of Peter Kalama and his first wife, Lillie Pitt, a Warm Springs woman, and their children. Kalama was of Native Hawaiian and Nisqually ancestry: a descendant of John Kalama of Kula, Maui and Mary Martin, daughter of “Indian Martin,” a Nisqually tribal leader. Peter Kalama and Lillie Pitt both attended the Forest Grove Indian Training School, now Chemawa Indian School, in Oregon.

Because of their darker skin tones, Kānaka Maoli in the early Pacific Northwest often saw similar racial prejudices as the Native/Indigenous and Black communities in the region. Though they were granted opportunities in the developing industries (fur, timber, canning, etc.), Hawaiians still faced discriminatory wages, limited political representation, and social stigmas.

In the 1800s, many Kānaka men who came to work in the fur trade started families upon arrival with Native women living on Turtle Island. Their children, with ancestry both Native Hawaiian and indigenous to Turtle Island, were typically separated from their families at a young age and taken to the boarding schools (residential schools). This was done in order to systematically assimilate the Native population on the stolen lands occupied by the United States, achieved through subjecting Indigenous youth to a Euro-American, Christian education and barring them from their own cultural practices. Ongoing until only a few decades ago, these violent colonial practices continue to have lasting trauma in Native communities stemming from the acts of mental, physical, cultural, and sexual abuse in these church-run government institutions.

In addition, numerous Kānaka and their new families, who were often of mixed ethnic descent, faced erasure of their Native Hawaiian or Indigenous (to Turtle Island) identities in the eyes of the United States and Canadian governments. These mixed families were forced to downplay or deny one half of their identity in order to carry out their lives within these colonial structures that refused to acknowledge both cultural roots. This was done in order to further assimilate Native people into Euro-American constructs while attacking the autonomy of Native Hawaiian settlers and Indigenous tribes. North of the 49th parallel, mixed Kānaka families were initially denied rights to live on Native reservations, even if they were born by Native women. Families such as the Nahanees, Wavicareeas, Kamais, and Fridays often changed their surnames and official records to be able to live on reservations near Victoria — a ‘right’ denied to those who represented themselves as Kānaka Maoli. On the other hand, those south of the so-called US-Canadian border were encouraged onto reservations and into boarding schools in order to erase their Kānaka title. As a result, by the 1870 US census, families such as the Cawanaias (Cowannie, Cowaniah) and the Kalamas were recorded as “Ind.” (‘Indian’) — in other words only Native/Indigenous, not Native Hawaiian.

Throughout its colonial history, the Pacific Northwest has often displayed and encouraged open racism towards its residents who weren’t of European ancestry. This has played out in the form of mob violence and killings, forced removals of entire communities from towns, segregation of residential areas, bans on immigration and employment, and harmful stigmas. 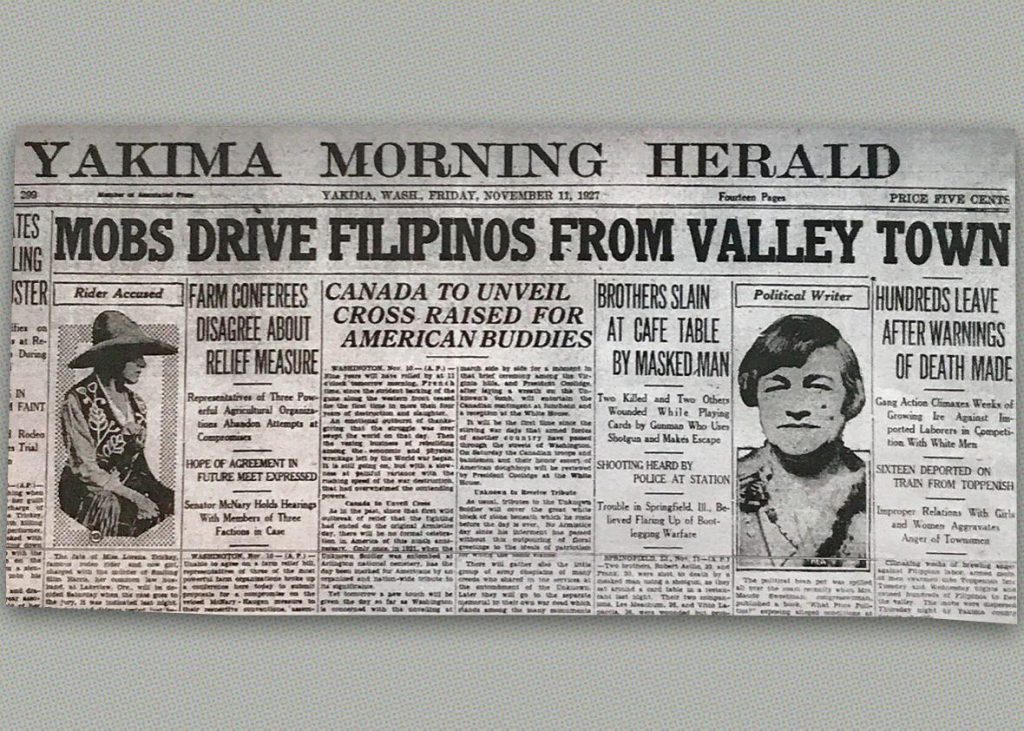 A 1927 front page headline from the Yakima Morning Herald tells of an entire community of Filipino residents subjected to mob violence and forced removal from the Toppenish area of Yakima Valley, WA. The rising tensions arose from baseless, inaccurate claims that Filipinos were forcing white men from the workforce and harassing local women. Similar incidents happened throughout Seattle, Tacoma, and much of the surrounding region. 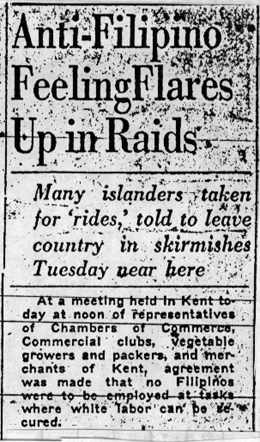 Coverage in the Globe Republican newspaper on May 8, 1930 detailed the racial tensions that gave rise to anti-Filipino vigilante raids in Seattle. Concerns about employment were used as a scapegoat for much of the racist actions taken against the growing Filipino communities in the urban and suburban areas. 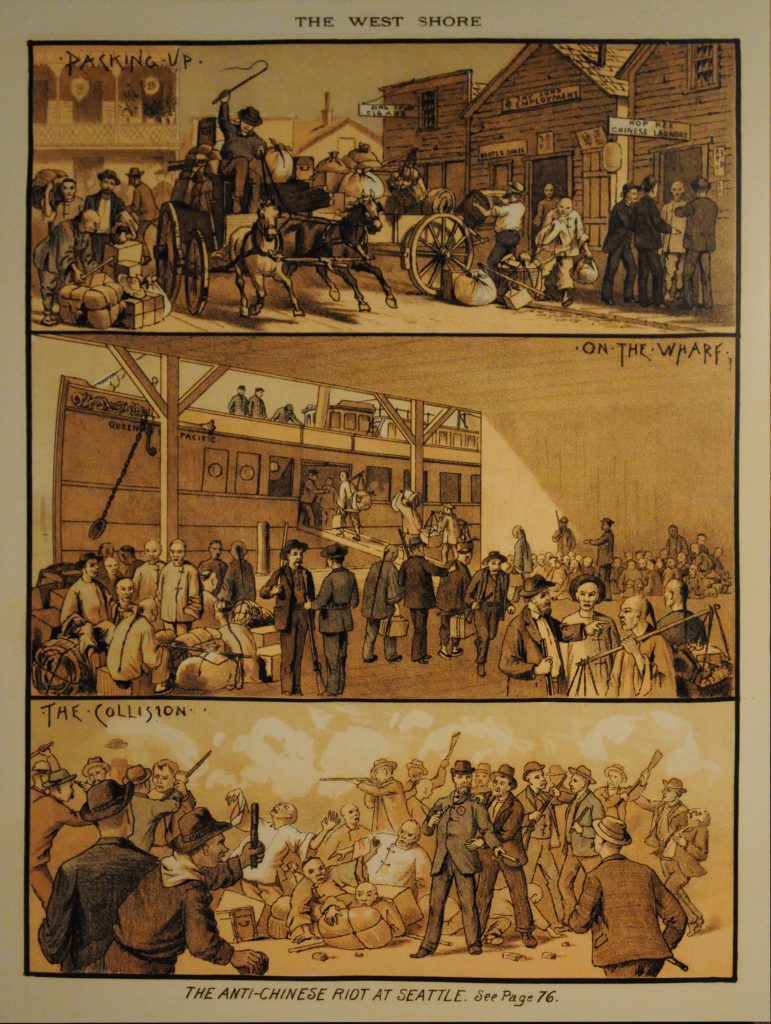 A newspaper illustration about the events of the 1886 Seattle Riots that resulted in the forced expulsion of over 200 Chinese residents by a mob affiliated with the Knights of Labor (a white labor union). As tensions rose, similar events occurred in the decades following, resulting in arson of Chinese businesses and homes, open violence, and targeted discriminatory tactics.

The racial tensions in Portland were no different than in other regions along the west coast. Asian communities settled in multiple parts of the city as urban development planners (along with racist state and city legislation) dictated where these groups could reside. After a flood in 1873, large communities of Chinese vegetable farmers moved into the west hills of Portland that had been transformed into fertile farmland. These farmers peddled their produce door-to-door and supplied most of the city’s vegetables until 1910, when city legislation limited where vegetable vendors could sell their goods—a law that explicitly targeted Portland’s Chinese farmers. As the city continued to grow and wealthy white residents moved into residential neighborhoods, communities of color were increasingly displaced. Today the area that belonged to Chinese vegetable farmers is occupied by the Multnomah Athletic Club (a high-end recreational facility) and Providence Park (home stadium for the local Timbers soccer team). 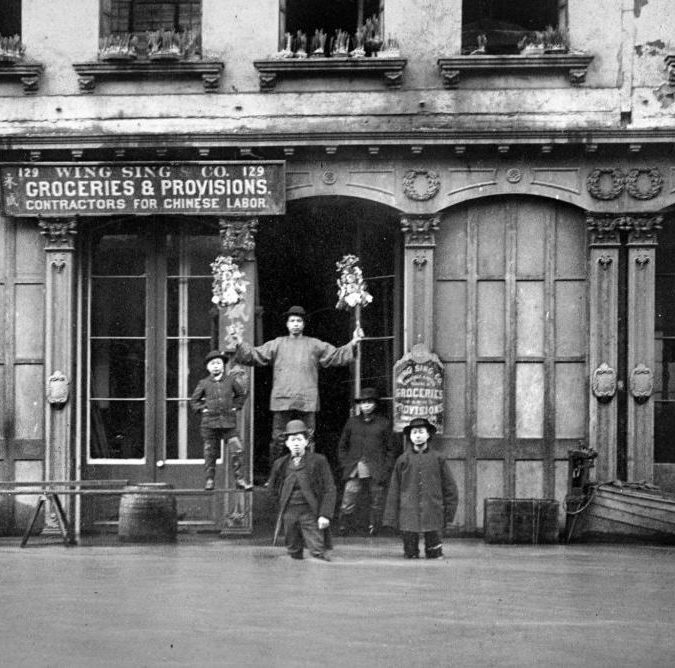 Chinese residents stand outside the shopfront of Wing Sing & Co. in the Chinatown district of downtown Portland during the 1894 flood. Today, the neighborhood is known as Old Town Chinatown, with only mere remnants of the once thriving community that served as a stronghold for the city’s Chinese immigrants, workers, and families. Modern gentrification of Portland’s communities of color has effectively pushed Chinese residents to the outskirts of the city, mainly around today’s Southeast 82nd Avenue and the surrounding area.

In response, these communities grew stronger in resilience as they formed labor unions and lobbied for equal rights and treatment. At the forefront of the labor movements in the Northwest were Filipino-American workers in Seattle, most of whom worked in Alaska salmon canneries during the summer and in farm fields during the rest of the year. These workers, also known as “Alaskeros,” formed the Cannery Workers and Farm Laborers Union (CWFLU)—the first Filipino-led union in the United States. 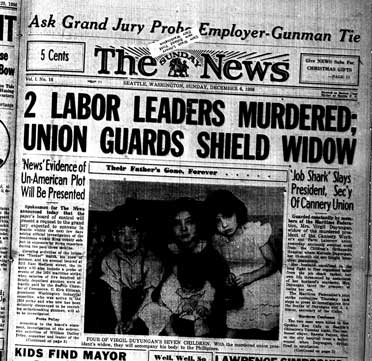 The Sunday News, a radical labor publication, reported on the December 1, 1936 killings of Virgil Duyungan and Aurelio Simon. The two men were founding leaders in the labor movement for the cannery workers and CWFLU. Their tragic deaths ultimately strengthened the power of the union, which promptly elected a new president and grew in numbers along the American west coast. 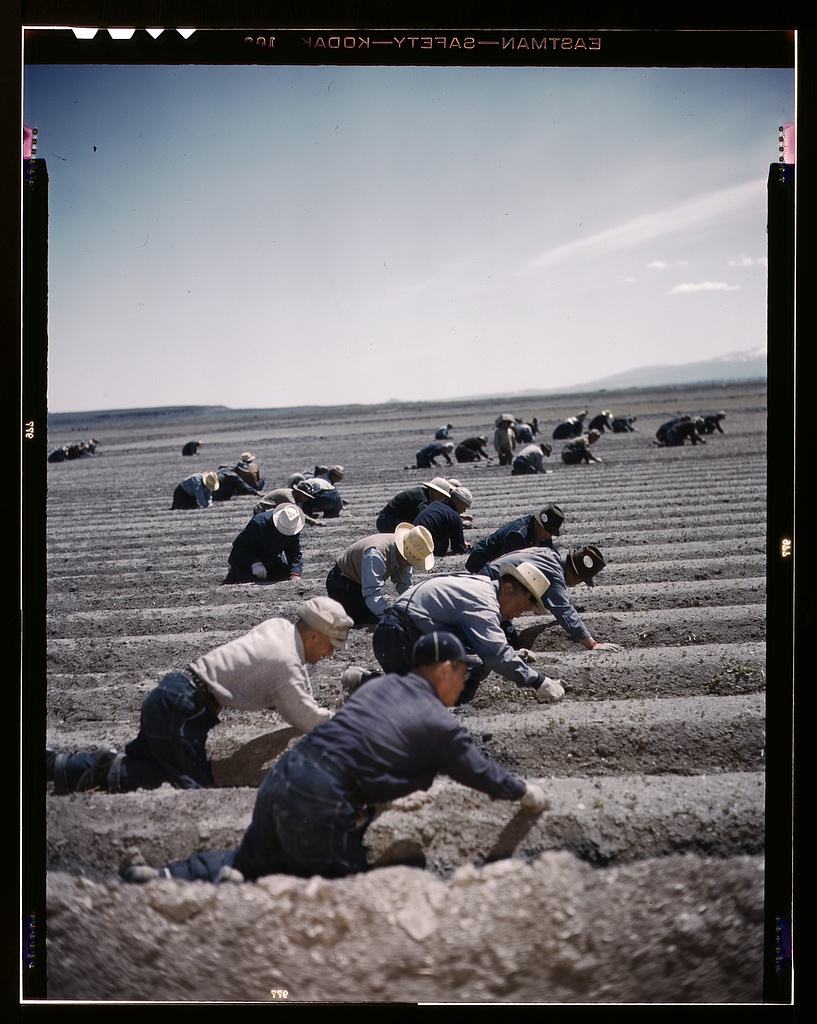 Oregon’s Japanese and Japanese-American population were primarily relocated to the Tule Lake War Relocation Center in Northern California. Once in the camps, Japanese internees were subjected to harsh labor on the fields and other facility maintenance. Tule Lake was the largest of ten internment camps during WWII with nearly 30,000 people having been detained in the camp during its four years of operation.

After the Japanese bombing of Pearl Harbor in 1941, the United States entered WWII and an era of extreme anti-Japanese sentiment. The height of this racial discrimination came when President Roosevelt signed Executive Order 9066 the following year, ordering the evacuation of all Japanese-Americans and those of Japanese ancestry in the American west into isolated internment camps.

Up until this point, Japanese immigrants and their families had established deep roots throughout the Pacific Northwest for several generations. In the Portland metro area, for example, extensive Japanese agricultural communities had settled in the neighborhoods of Hood River, Hillsboro, Montavilla, and suburban Portland. Families held intergenerational farms, grocery and supply stores, and more. When Executive Order 9066 went into effect in 1942, Japanese residents and Japanese-Americans had to give away, sell, or make arrangements for the care of their property and farms before being hastily relocated to isolated concentration camps. They were given only five days to do so.

Initially, the diaspora of immigrant groups and Kānaka Maoli from Hawaiʻi came to the Pacific Northwest seeking a better life, better pay, and better opportunities. Despite these ideals, however, these early Asian and Pacific Islander communities struggled to see those dreams come to fruition due to discriminatory limitations set in place by a Euro-American colonial government. Communities of color were not welcomed into social and political circles, and were consistently the recipients of racially-motivated violence in varying degrees for generations. 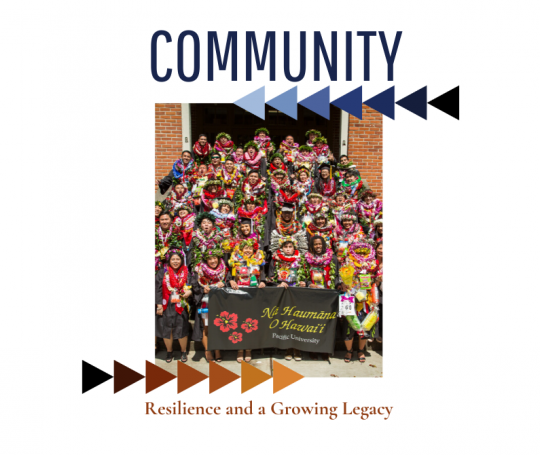 Next History Page – Community Resilience and a Growing Legacy