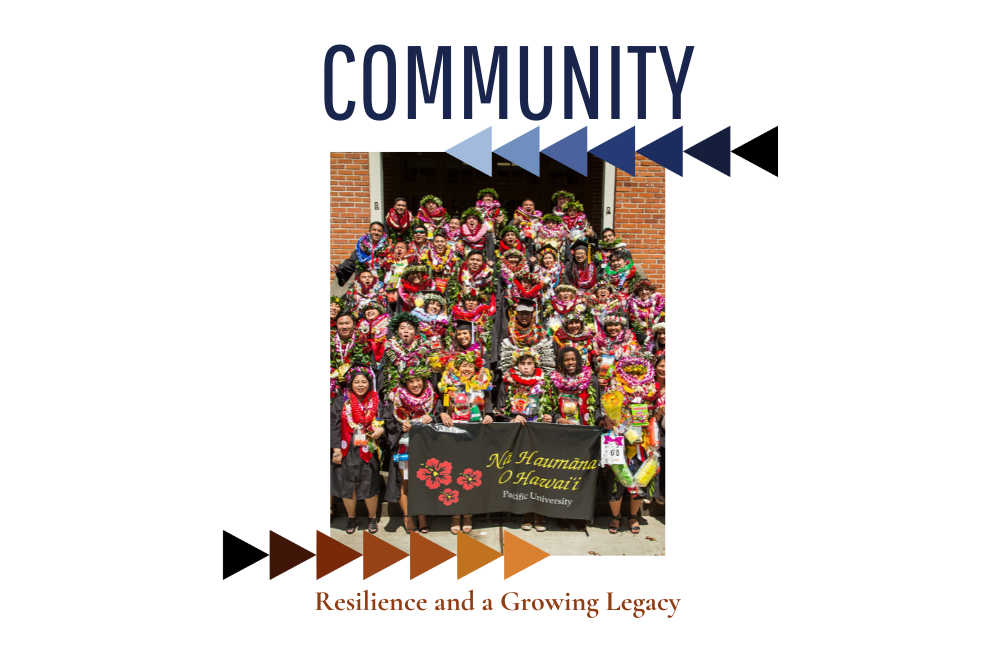 A History of Resilience

In the face of the challenges that the communities in the Hawaiʻi-to-Pacific Northwest diaspora experienced—racial discrimination, cultural displacement, limited opportunities, to name a few—these groups persisted through their shared resilience. Tight-knit, self-sufficient urban communities arose in cities along the American west coast in response to these obstacles, planting the seeds for many vital connections still seen in action today.

In cities like Portland and Seattle, Asian communities maintained their connections to heritage through traditional celebrations and festivals in honor of customs practiced in their home countries. For Japanese immigrants prior to WWII, kenjinkai were social associations that assisted members in finding jobs and making connections in a new home. After the onset of the war and subsequent forced relocation, the Japanese remained proud of their heritage and formed strong relationships through religious gatherings, sports games, Japanese language schools, and more within internment camps. 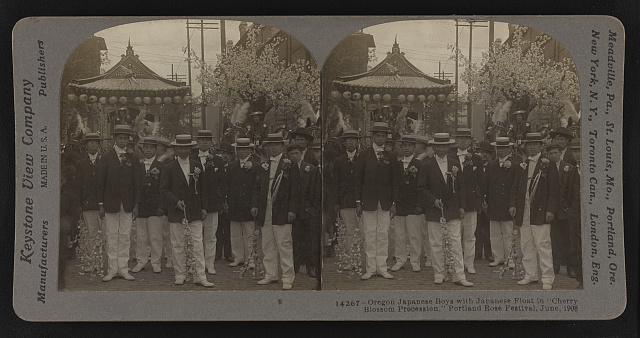 A group of Japanese boys lead the Cherry Blossom Procession in the Portland Rose Festival of 1908. Holding a great deal of symbolism in Japanese culture, this was brought to Portland by the city’s Japanese-American residents. Today, rows of Akebono cherry trees line the north end of Waterfront Park in downtown Portland, Oregon—they were a gift from the Japanese Grain Importers Association in 1990 to honor the contributions of the Japanese community in the region.

Chinese workers and families—including those who arrived from Hawaiʻi in the early 20th century seeking better lives than what was available on the sugar plantations—found connection through associations similar to the Japanese kenjinkai and strong familial networks. Prominent organizations such as the Gee How Oak Tin in Seattle offered business loans and opportunities to local members, while business coalitions such as the Chong Wa Benevolent Association (chartered in Seattle, 1910) aimed to protect immigrant workers and advocate for political affairs in the city’s Chinatown. Dense and vibrant neighborhoods housed large urban Chinese populations, and communities often took extensive measures to reconstruct and alter their leased buildings to resemble architectural elements from their native country and better suit their needs. Places like Portland’s Old Town Chinatown district, though largely vacant today, still show these features on many of the multi- use buildings, storefronts, and signage. 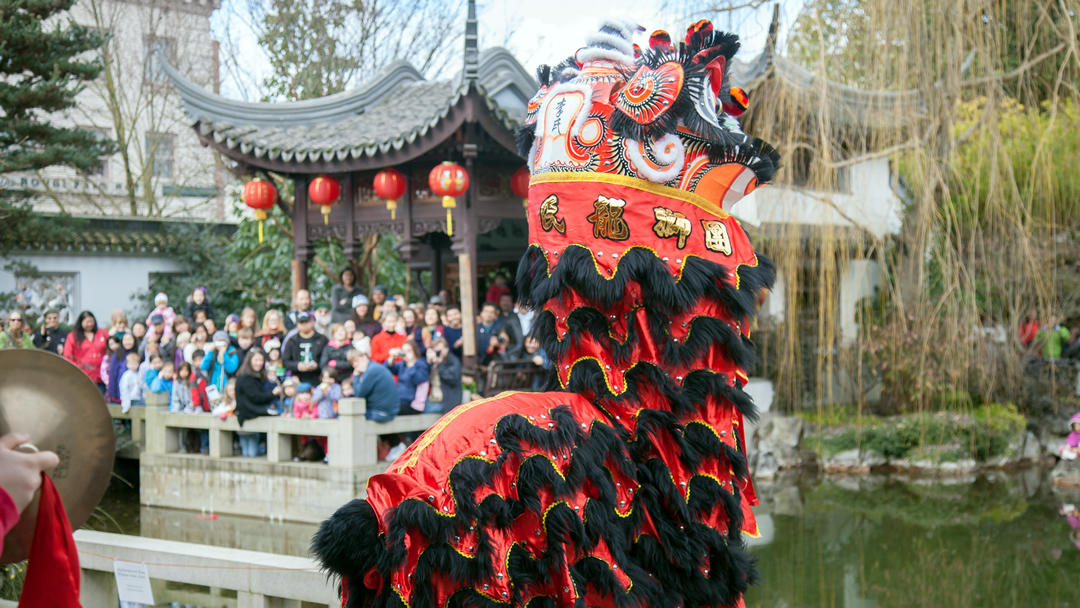 Portland’s Chinese were first allowed to participate in the city’s Rose Festival in 1916, marking the acceptance of Chinese and other Asian communities into mainstream civic networks. This also spurred the movement of these groups into neighborhoods outside of the designated Chinatown or Japantown. Today, community organizations such as the Lan Su Chinese Garden remain one of the few active members in the Old Town Chinatown district and hold widely attended cultural festivals throughout the year, such as the Lion Dance shown here.

Filipino communities also spread in concentrated clusters up and down the west coast throughout the 20th century. Most of these early newcomers were single men employed in the salmon cannery industry, and did not have families of their own in the US. Instead, Filipino women would occasionally step in as surrogate relatives and create new “families” to recreate a sense of the home dynamics they would have experienced back in the Philippines. In addition, Filipinos found solidarity and unification through labor unions and advocacy for equal rights issues throughout the 20th century. These communities led the legal fight against harsh labor contracts, housing restrictions, and other discriminatory limitations placed on Asian and Pacific Islander groups. Like other immigrant groups in the Hawaiʻi diaspora, Filipinos also found connection through religious congregations, namely the Roman Catholic Church.

Like others from the Hawaiian plantations, some Koreans either chose to return to their home country or seek further opportunities along the American west coast after their labor contracts expired. Roughly half of these Korean immigrants relocated to the Pacific Northwest, while the rest either remained in Hawaiʻi or returned to Korea. Those who arrived in the Pacific Northwest in the early 20th century found success through large agricultural communities and employment along the railroads. Though their farming efforts were challenged by the California Alien Land Law (Webb-Haney Act) of 1913, which severely impacted Asian land ownership and leasing, Korean immigrants found lasting connections through Christian congregations and similar cultural backgrounds. 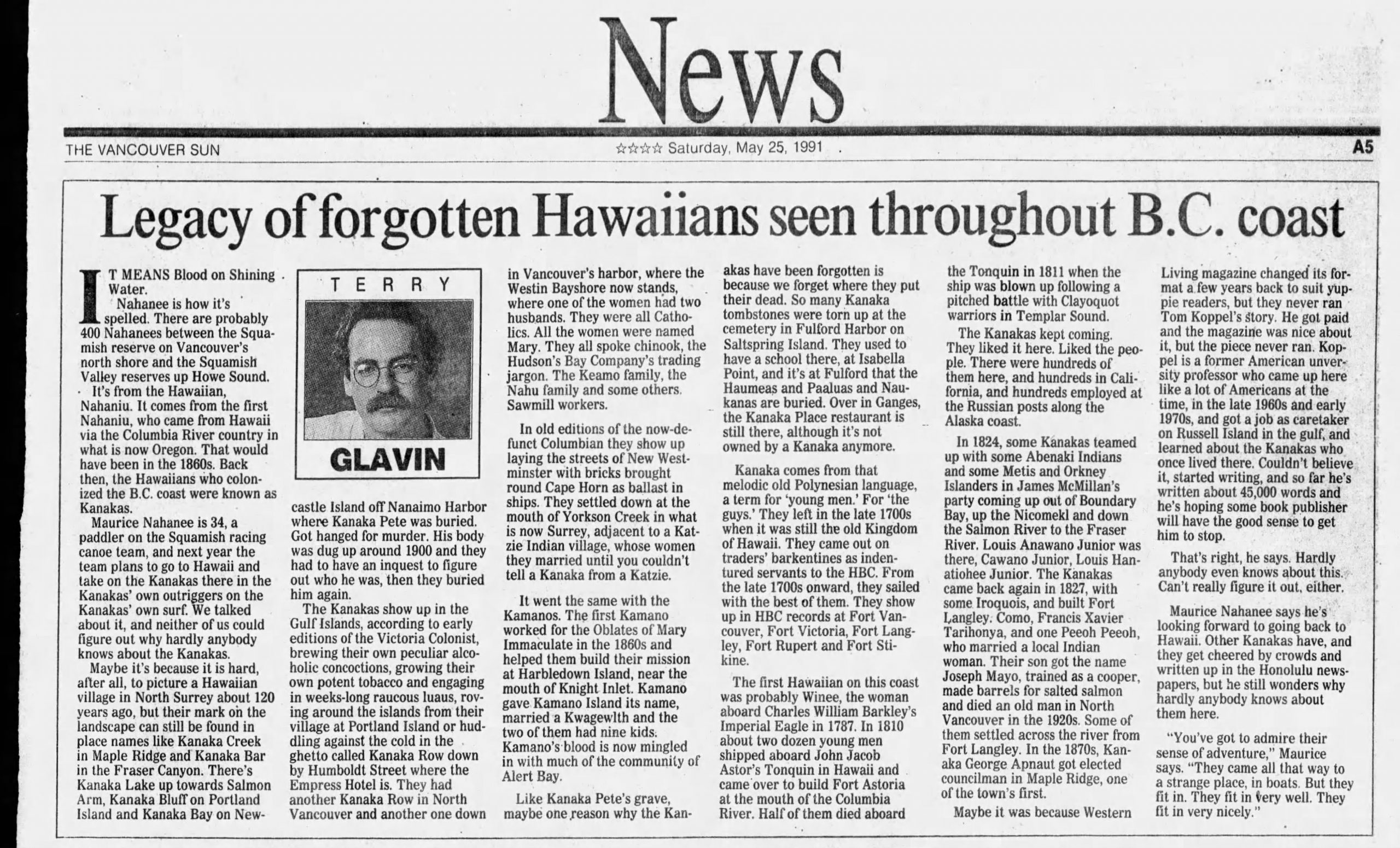 The 1970s saw a resurgence of the Hawaiian diaspora as media outlets “rediscovered” the history of Kānaka in the Pacific Northwest and Canada. Some of these agencies sponsored visits to Hawaiʻi for modern-day descendants to reconnect with their cultural roots. Today, these families—many of whom still reside in the Salt Spring Island and Vancouver areas—play an integral part in preserving archival documents and photographs, as well as organizing community gatherings to keep these stories alive.

Kānaka communities, though relatively smaller in size, all felt the same pull to remain close to each other and their shared cultural identity. Beginning with the fur trade, Hawaiians gathered together in their small villages and trade forts for lūʻau (potluck feasts), sent for newspapers in their native language, held deep interfamilial ties with each other, and even made their own version of a taro-less poi from a wheat flour paste. In all twelve outposts of the Hudson’s Bay Company, by which over 500 Kānaka men would be employed, these connections to heritage were maintained through thriving community networks. Place names honoring their legacy and contributions can be seen in locations such as Kanaka Bay and Kanaka Creek in today’s British Columbia, Owyhee River in Oregon, and towns like Kalama, Washington (there is some dispute about the origins of this name, but many accounts attribute it to John Kalama who arrived in the Northwest to work in the fur trade in the early 1800s).

By being in a tight-knit community, I feel that you make connections much more easily and feel like you aren't as displaced. 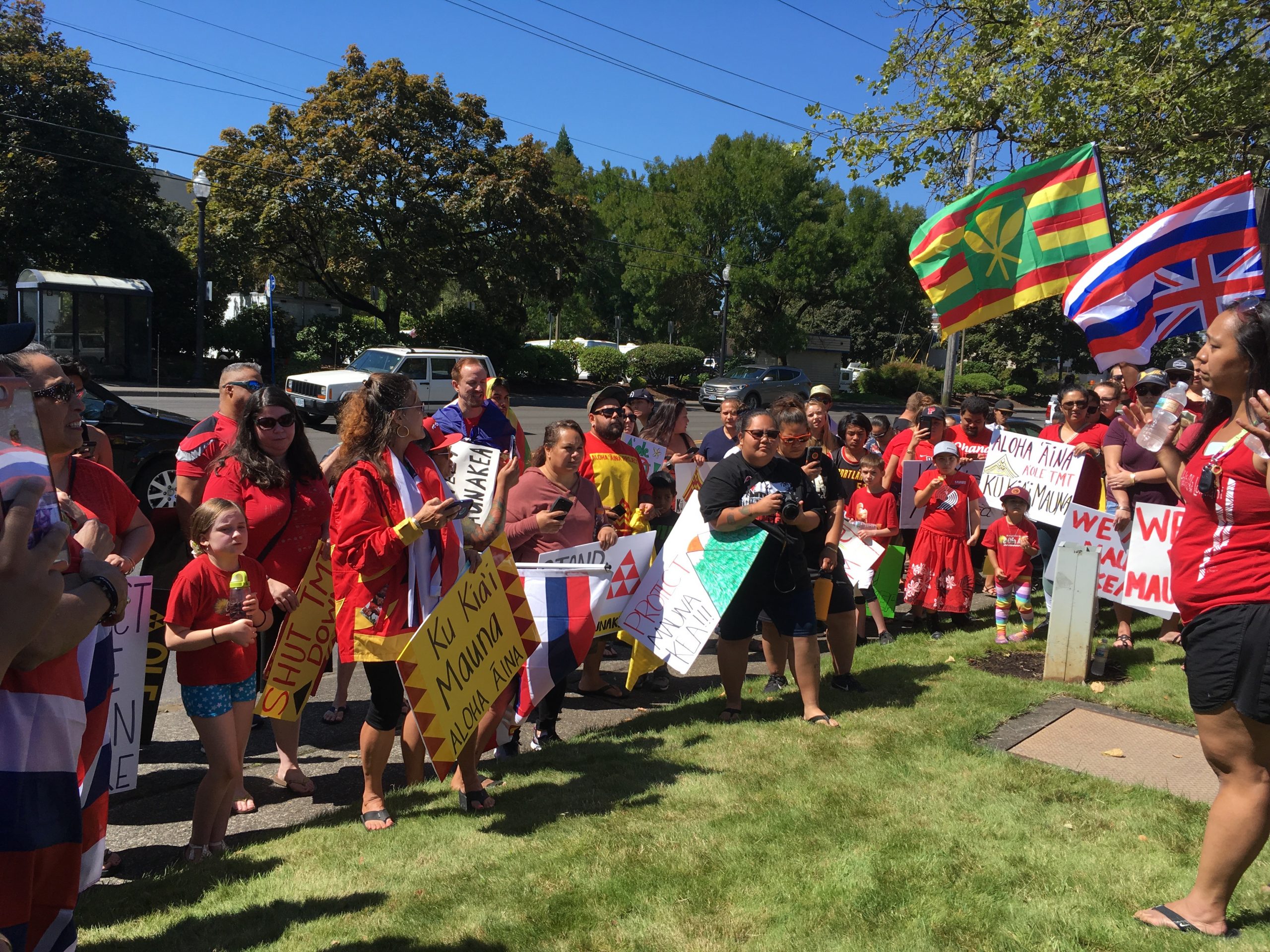 A sign waving event organized by local Hillsboro hula hālau Ka Lei Haliʻa O Ka Lokelani in 2019 to raise awareness about the ongoing protests against building the Thirty Meter Telescope (TMT) on Hawaiʻi’s Mauna Kea. Attended by dozens of community members from the Portland metro area, events like these allow Native Hawaiians to advocate for important political and environmental issues even away from their homelands.

Hula hālau Ka Lei Haliʻa O Ka Lokelani, founded by Kumu Hula and educator Leialoha Kaʻula in 2009, has played a vital role in educating the local community about Native Hawaiian culture through dance, song, and language programs. The hālau serves a community of over 100 individuals and many families from the surrounding Portland suburbs.

Many Asian and Pacific Islander families continue to relocate to places along the west coast, seeking work opportunities and relief from the rising costs of living in Hawaiʻi.  The 2010 census notes at least 101,201 Hawaiians living across Oregon, Washington, and Idaho. According to a 2018 report by the Coalition of Communities of Color “Native Hawaiian and Pacific Islander Communities are the fastest growing community (for whom data is available) in both the US and in Washington County (Oregon); they have grown by approximately 60% between 2010 and 2015.” The report gives further detail about the very county where Five Oaks Museum is located: “In Washington County there are at least 5,538 residents from 20 distinct Pacific Islander communities, which is likely a population undercount. Polynesian communities such as Samoan and Tongan are the largest subgroup numbering around 3,719. There are at least 2,761 Native Hawaiian residents, and fewer than 1,000 people of Micronesian descent.”

One of the greatest contemporary challenges is the culture shock and feelings of displacement in an unfamiliar and very different place. Dozens of community organizations and hula hālau are now scattered throughout the region, serving as centers of cultural education and social connections. Schools like Pacific University in Oregon and the University of Washington have long-standing extracurricular clubs to specifically serve students of mixed backgrounds who are part of the Hawaiʻi diaspora. When combined with affiliated local established Asian communities, those from the islands have many opportunities to honor their heritage even when separated by over 2,000 miles of ocean. 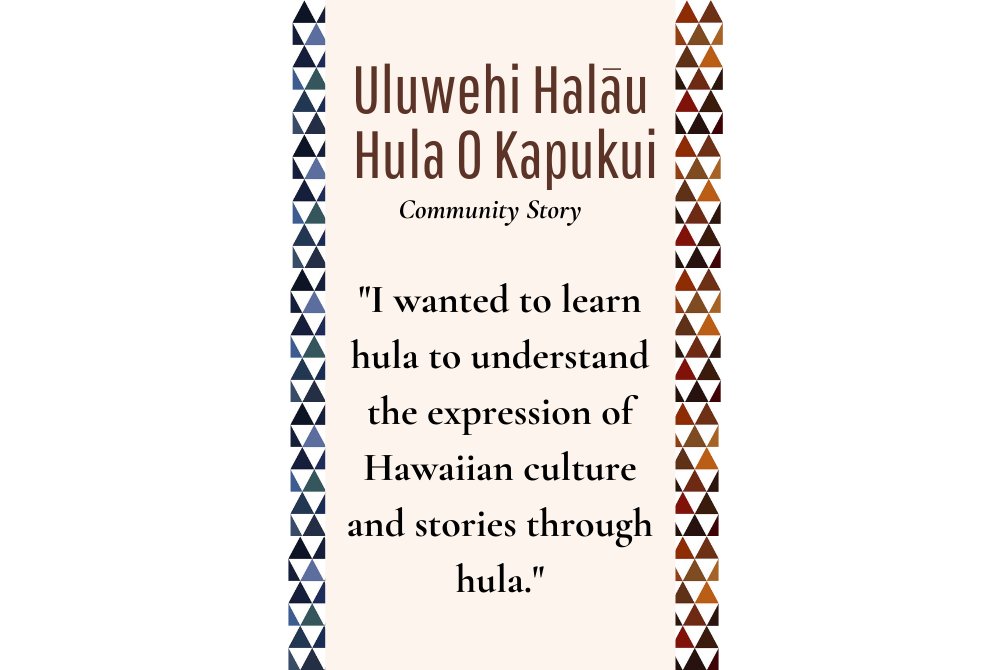 Some students from the hālau offer their manaʻo (thoughts and reflections) about their connection to hula, culture, and community. Read their story here. 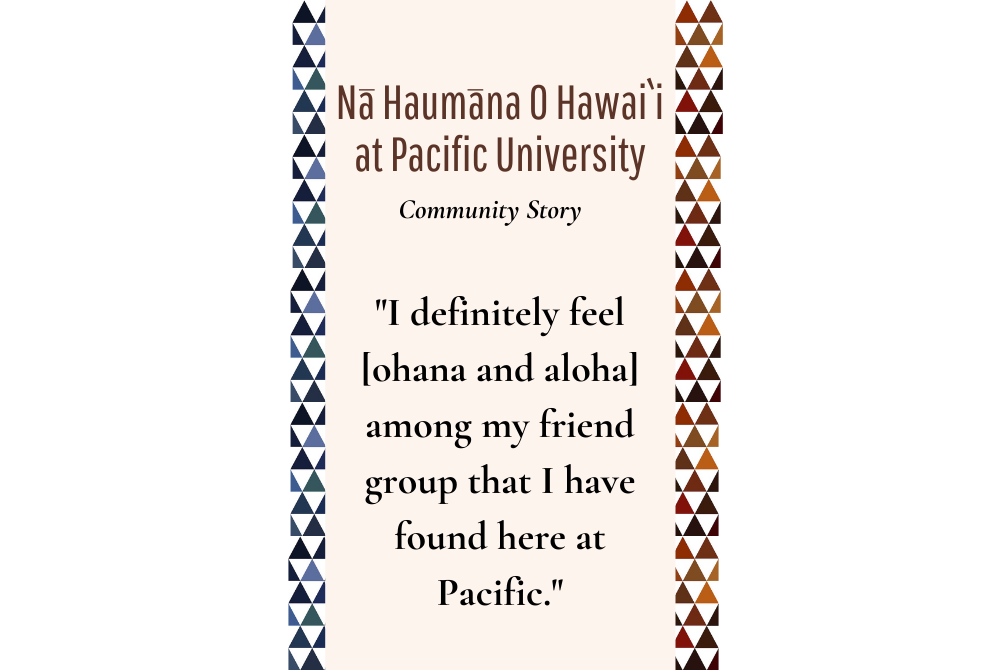 Some students from the Nā Haumāna O Hawaiʻi at Pacific University offer their manaʻo (thoughts and reflections) about their connection to culture and community while in college on the mainland. Read their story here. 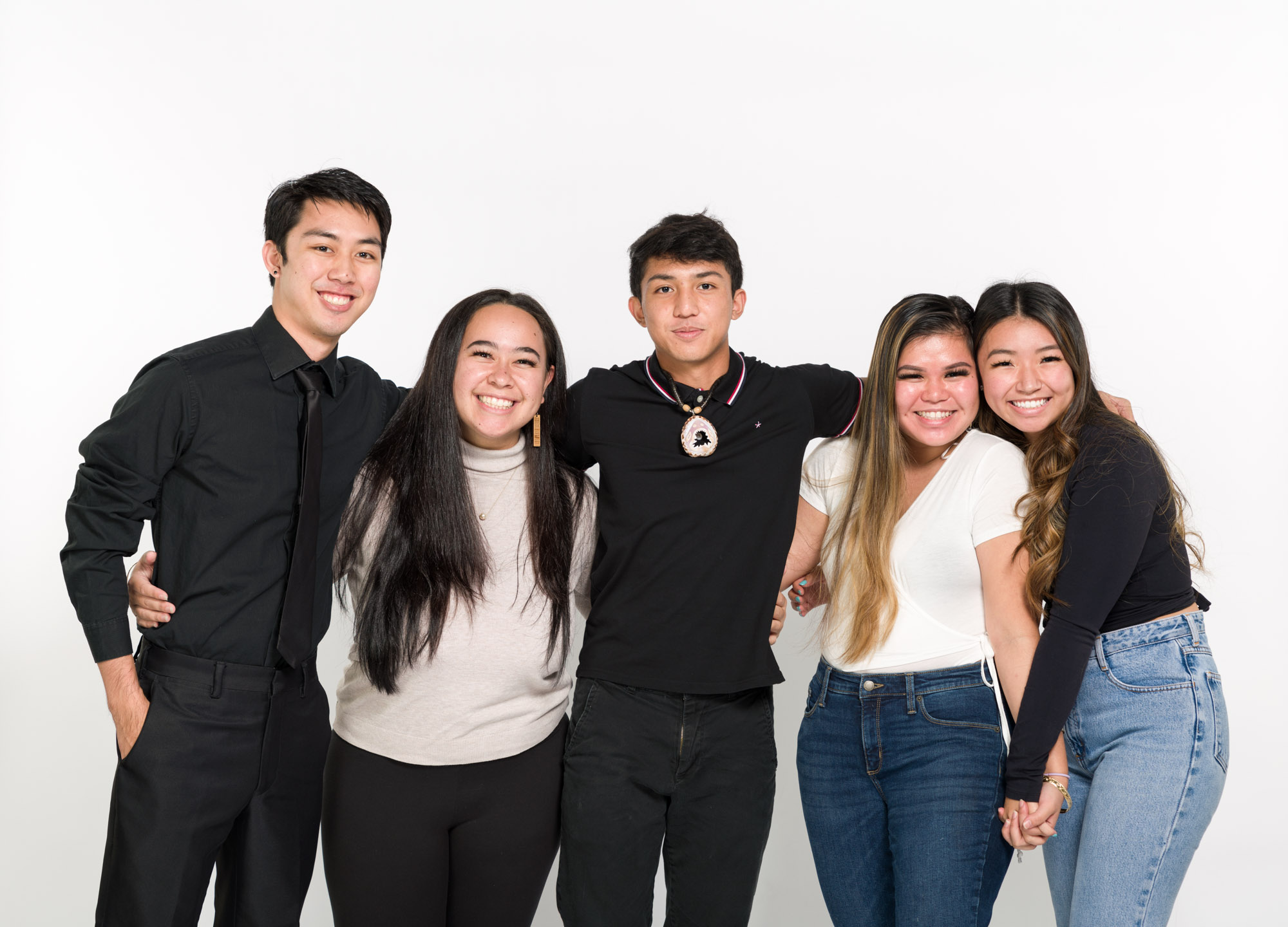 Alongside this exhibition Lehuauakea is launching a new community-oriented initiative, The Pasifika Action Award, to uplift Oregon youth who are working to strengthen cultural ties to Pasifika ancestry. Regardless of whether applicant(s) plan to pursue a traditional academic higher education or something else entirely, the Pasifika Action Award seeks to recognize one’s commitment to their specific communities, how ancestral heritage is honored through their work and vision, and how these award funds may be used to further their goals and contribute to community resilience. The first round of awarding will be held for the 2020 – 2021 academic school year, intended for eligible graduating Oregon high school seniors with Pasifika ancestry in Spring 2021. Two awards will be given annually, with award values determined in Spring 2021 based on donated funds.

Fundraising for the first round of the Pasifika Action Awards will be conducted throughout the 2020-2021 school year. Donations of $50 ($45 for Five Oaks Museum members) and above are eligible to receive a complementary printing of a new forthcoming serial publication, Kūpaʻa Magazine. The first edition of the magazine (coming Spring 2021) will feature work by contemporary Pasifika artists and makers, voices from the Pacific Northwest Pasifika community, and select content from the DISplace online exhibition.

The Pasifika Action Award is fiscally sponsored by the APANO Communities United Fund. Learn more and make your contribution here. 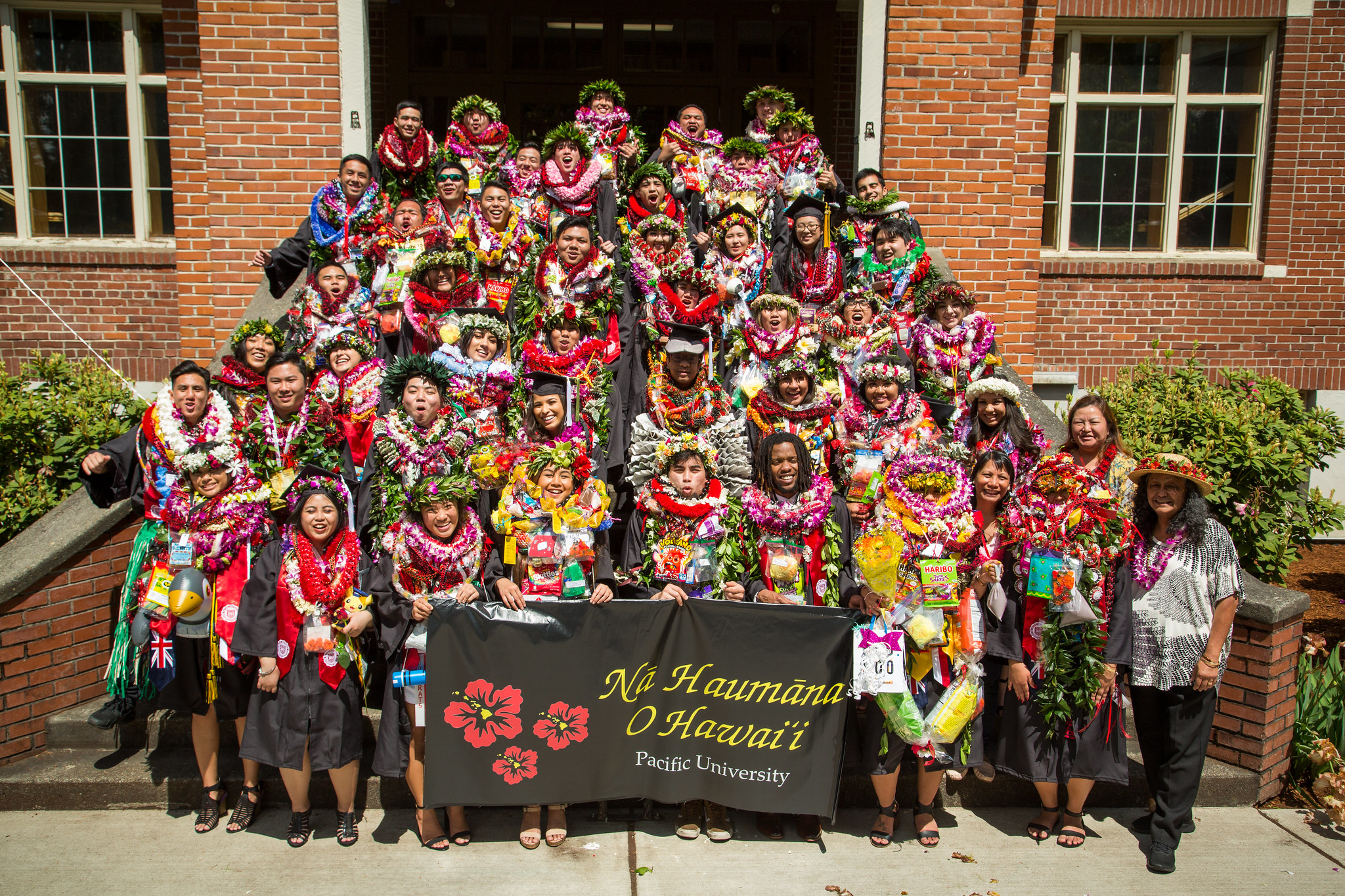 Nā Haumāna O Hawaiʻi in the 2019 graduating class at Pacific University. Each student is wearing multiple lei around their necks as is tradition in graduation celebrations back home in Hawaiʻi. 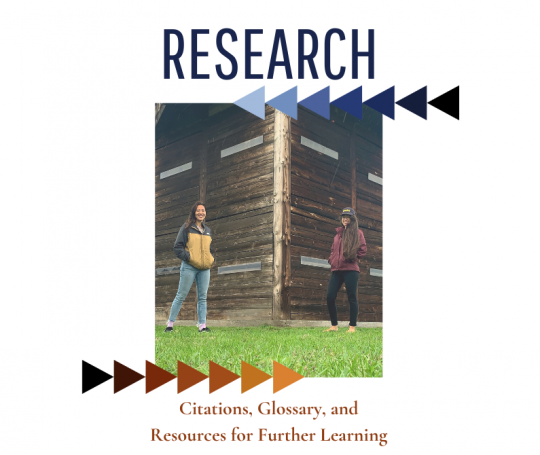 Next – Research: Citations, Glossary, and Resources for Further Learning