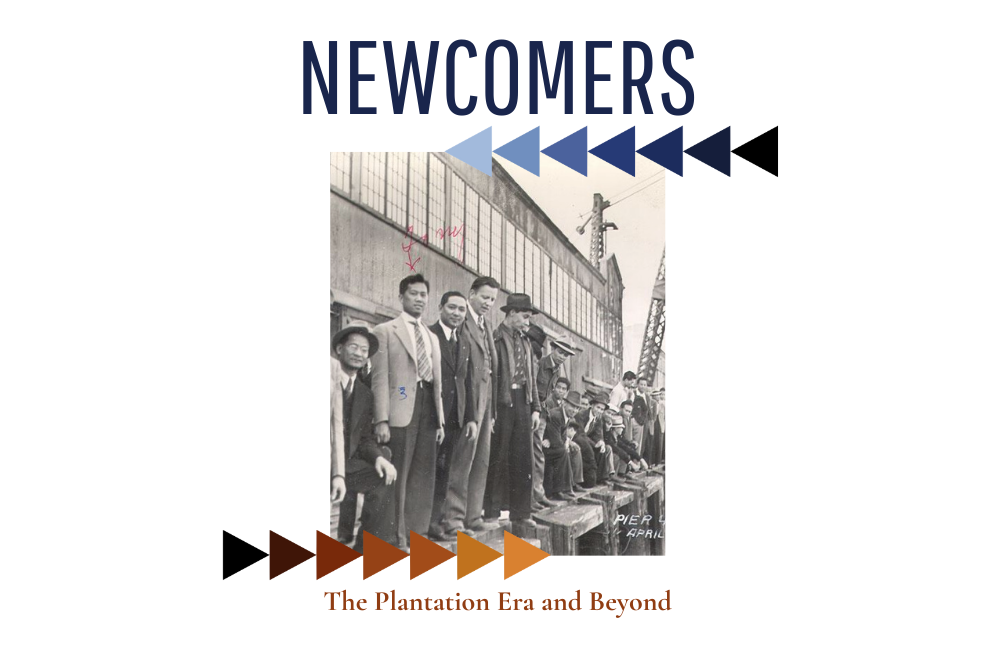 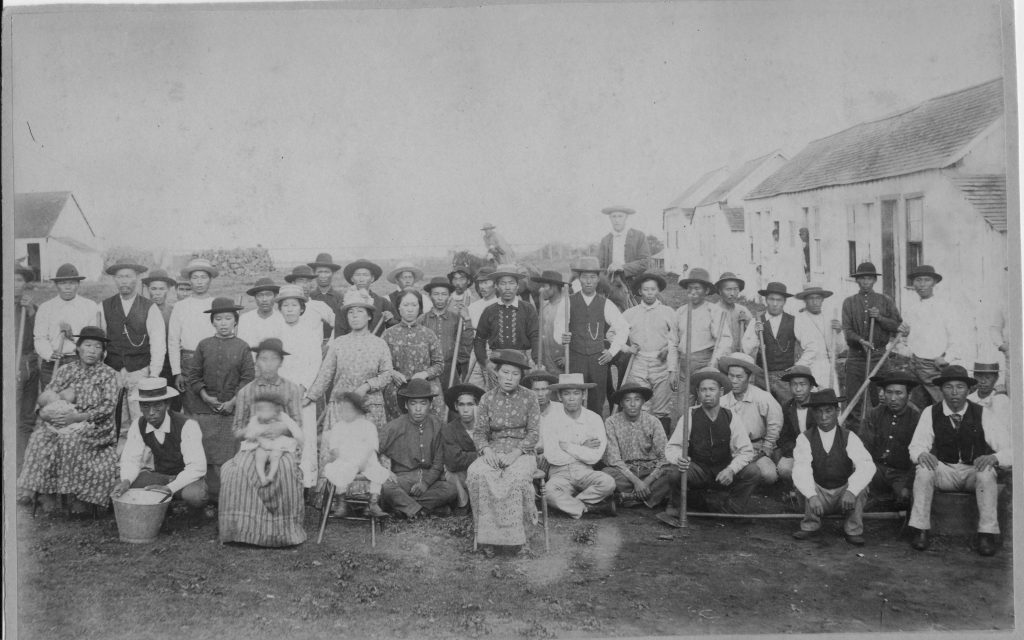 A community of Japanese sugar cane plantation workers in Kaʻū, Hawaiʻi Island in 1890.

As the land-based and maritime fur trades started to decline and recede further north along the west coast of Turtle Island, the sugar cane plantation era in the Hawaiian Islands rapidly expanded. This was facilitated through the coordinated labor of immigrants who came primarily from Japan, China, and the Philippines, with additional smaller communities coming from Korea, Portugal and a handful of other countries. 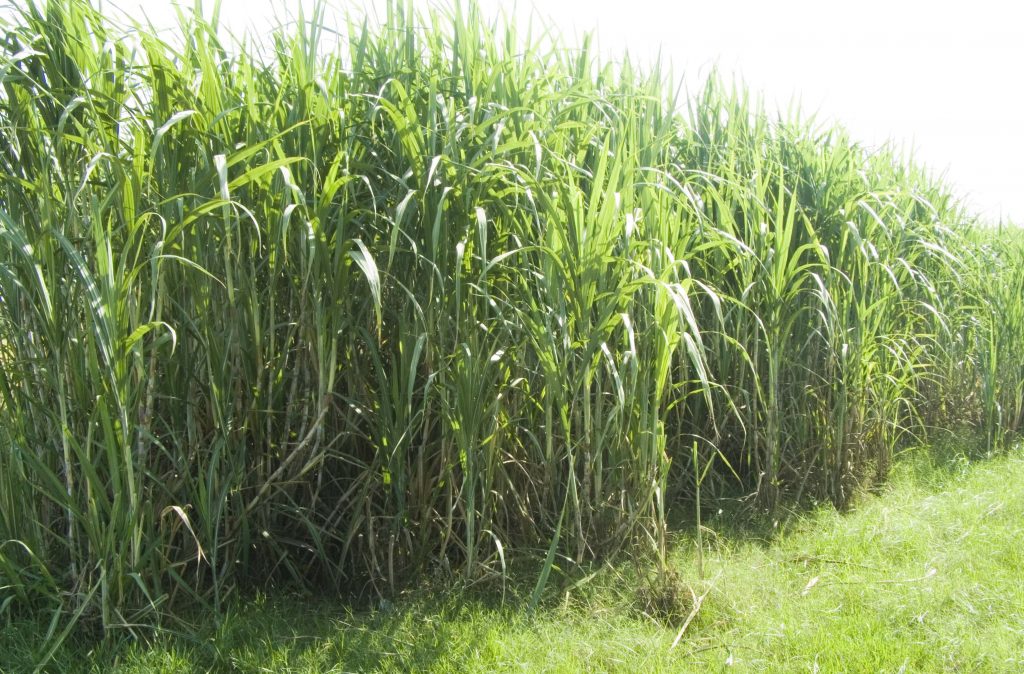 Sugar cane grows in dense thickets. Workers must use large blades to cut through the shoots and leaves in order to harvest the sugar cane, which is a highly strenuous task.

The first sugar mill in Hawaiʻi was set up on Lānaʻi island in 1802 by an early Chinese immigrant, Wong Tze-Chun. Though his mill was short-lived, it marked the beginnings of the large-scale agricultural export trade that directly contributed to the cultural diversity represented in the islands’ population for the last 150 years. Long-term successful sugar plantations were launched beginning in 1835. From then until the early 1900s, a steady stream of foreign newcomers arrived with hopes of employment and opportunity. 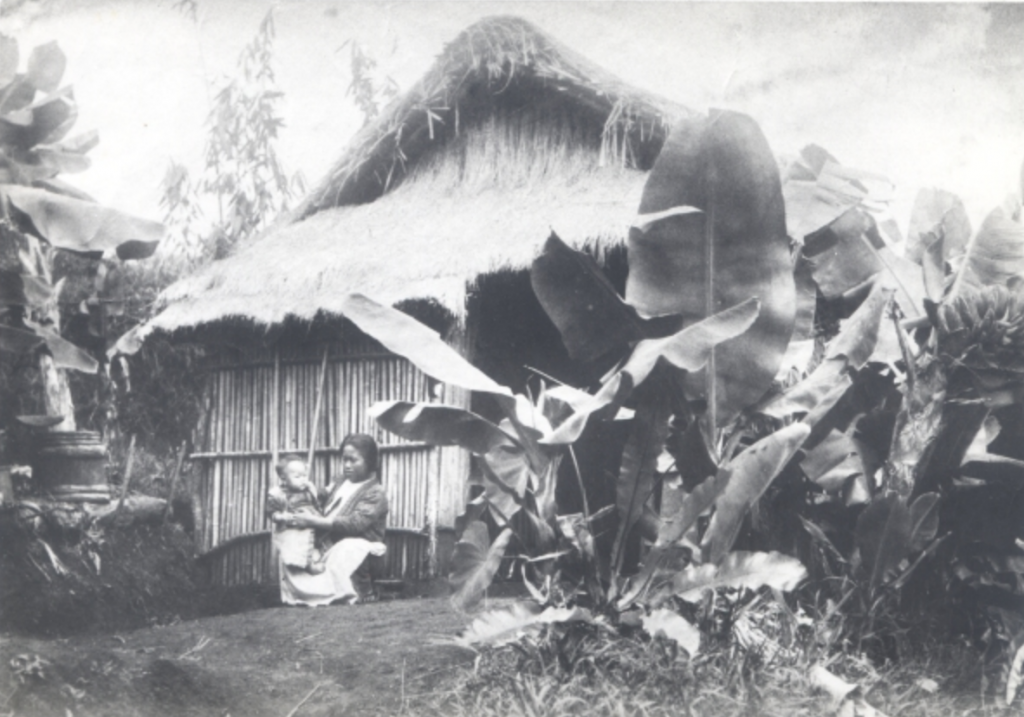 A Japanese mother and child sit outside their home in Hilo. The walls of the home are constructed from bamboo with roofing made from thatched pili grass.

These newcomer groups settled in clusters surrounding the numerous plantations that were built on Hawaiian lands. To fulfill the large workforce requirement, labor contracts and diplomatic agreements were made between the sugar industry, the Hawaiian Kingdom, and foreign countries to bring in workers from abroad. Most were young men and a few families from working-class, rural regions who earnestly sought opportunities unavailable to them at home. However, upon arrival they quickly saw the reality of the harsh plantation conditions and were faced with the difficult option of staying for the remainder of their labor contracts or finding employment elsewhere. Many chose to seek other opportunities after the illegal annexation of Hawaiʻi by the United States in 1898 and subsequent ban on contracted labor in 1900.

Freed from their labor contracts, handfuls of these Japanese, Chinese, Filipino, and mixed-race plantation workers sought better opportunities and pay along the west coast, where some of their descendants still reside. They would see mixed results in the opportunities afforded to them upon arrival. 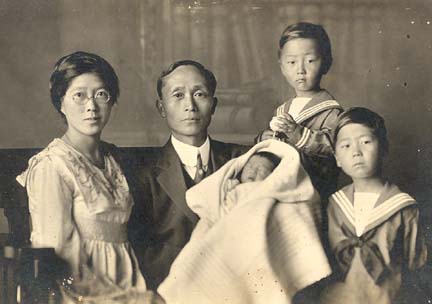 Photograph of Chan Ho Min, his wife Mollie, and their three children, 1922. Image courtesy of the University of Hawaiʻi Center for Korean Studies.

The missionary complex also had direct ties to Korean immigration and Hawaiian sugar cane plantations. When the 1882 Chinese Exclusion Act banned labor immigration from China, U.S. diplomat and Presbyterian minister, Horace Allen, traveled to the Incheon region of Korea to recruit new plantation workers. He also brought with him his religious convictions, which spread throughout Korean communities in their home country. More than half of the first 102 Korean workers in Hawaiʻi were recruited from the Naeri Methodist Church in Incheon. Shortly upon arrival, this group founded the first Korean Methodist church in Honolulu and created solidarity through a growing religious community. This image shows prominent Korean Methodist minister, Chan Ho Min and his wife Mollie with their children in 1922. 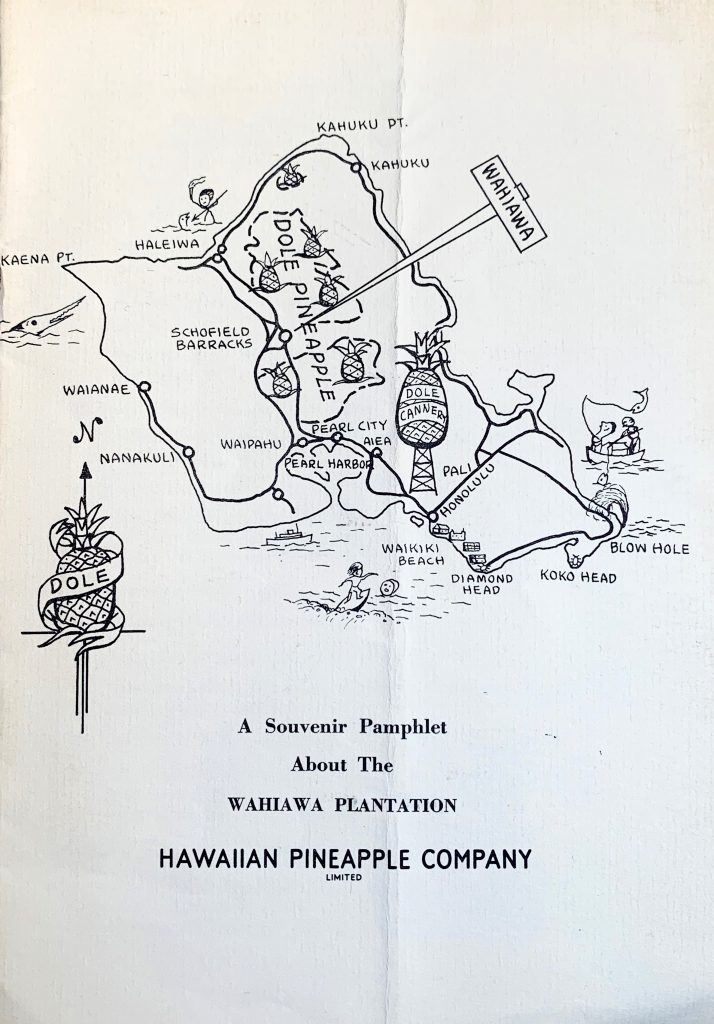 This souvenir informational pamphlet is from the Wahiawa pineapple plantation on Oʻahu, owned by Dole. The plantation owners and sugar barons had a direct influence on the exponential growth of tourism in the 20th century, which continues to this day.

Into the 20th Century

A number of the Japanese families who came from Hawaiʻi set roots down around today’s Portland metro area, where they primarily relied on farming for income. Some of their modern descendants remain in the region over a century later. These families include:

Shintaro and Tatsu (Kaji) Okita — The couple married in Japan in 1897, and emigrated to Honolulu shortly after. Once in Hawaiʻi, they built a life working on the cane fields for a brief period, temporarily relocated to Japan, and eventually settled in Oregon in 1912. They worked on the Montavilla Farm in what is now Portland until 1933.

Sakajiro and Yaye (Samihiro) Takeuchi — Sakajiro came to work on Hawaiʻi’s sugar plantations for a few years before leaving for better work in San Francisco, and eventually Portland. In 1911, he married Yaye who came to the United States as part of the generation of Japanese “picture brides.” Once moving to Oregon, they made a life as a farming family in what is now Hillsboro, Portland, and Gresham.

Minekichi and Sute Tamura — The Tamuras left Japan for Hawaiʻi in 1907 for work. After a short time working on the plantations, Minekichi left for the west coast seeking better employment. He found work at several sawmills in today’s Seattle-Tacoma area, and saved up enough of his wages to bring his wife and children from Hawaiʻi to join him in the Pacific Northwest. After reuniting, the family relocated to Oregon where they took up farming along Troutdale Road in Gresham. These agricultural workers, including a few Japanese immigrants, were employed by the Troutdale Cauliflower Company in Oregon. 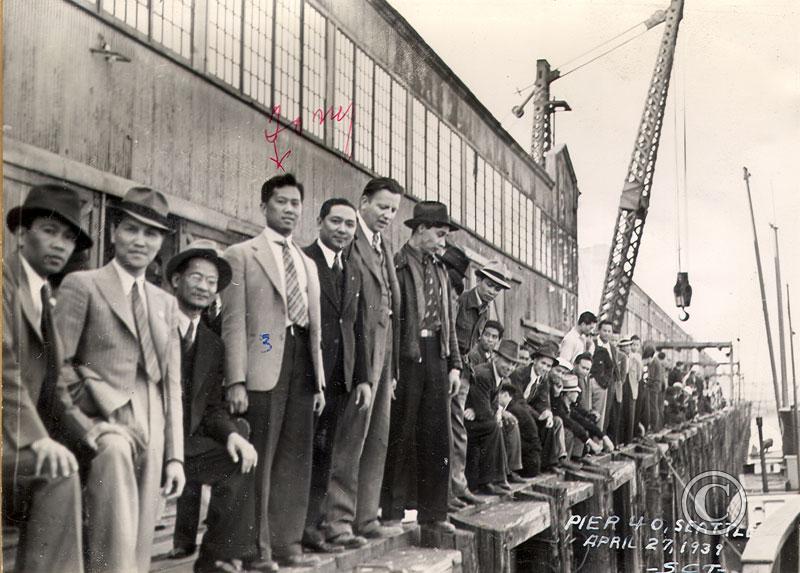 A group of Filipino workers wait at port in Seattle while en route to the salmon canneries in Alaska. Because the Philippines were under the United States’ colonial influence, thousands were able to immigrate to Hawaiʻi and the west coast for work opportunities. 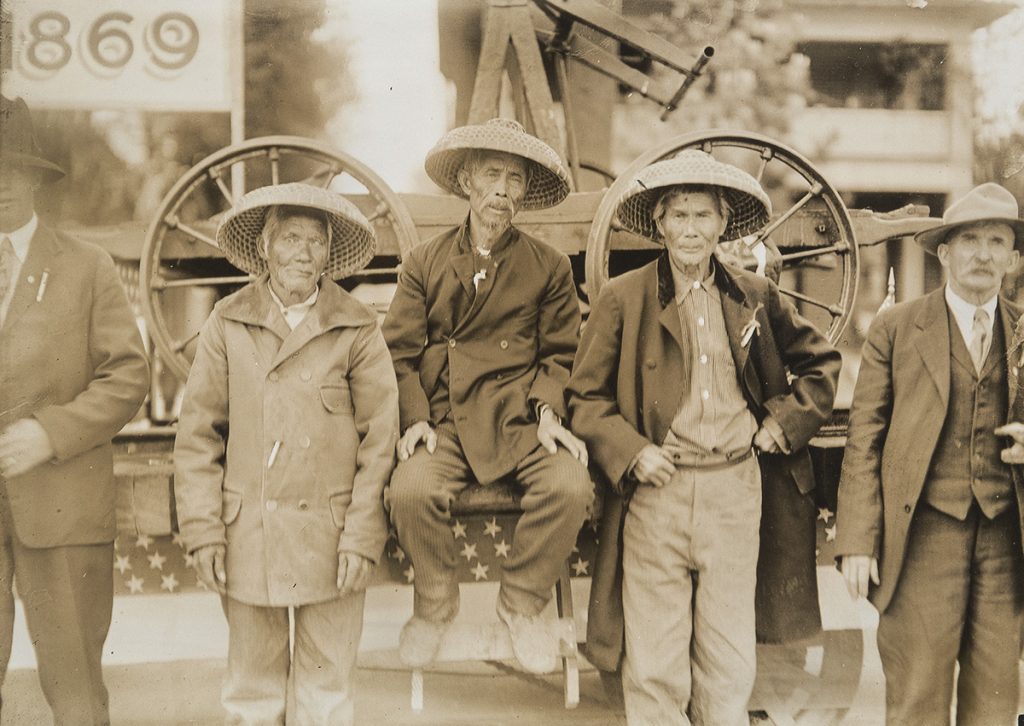 Chinese laborers built much of the transcontinental railroad system that connected industries across the United States.

Furthermore, additional communities of Chinese, Filipino, and other plantation workers traveled to the west coast in the early 1900s. These groups found employment in the coal mines in modern-day western Washington, the California Gold Rush, transcontinental railroad construction, and other growing industries. Despite these new opportunities, Chinese newcomers were still faced with anti-Chinese discrimination after the Chinese Exclusion Act of 1882, and were strictly limited in terms of social mobility even in places they were permitted to reside. Canada also passed their own version of the Chinese Exclusion Act in 1923 which further taxed and restricted its Chinese population.

Nevertheless, with their deepening ties to their own families and employment in a new home, these Asian/Pacific Islander (API) immigrants often stayed in the Pacific Northwest even after their labor agreements expired, provided they were able to safely stay there under the regional laws. As a result, these families and individuals contributed directly to the transportation connections and industrial growth in the region as they built a life in a new place. By the early 1900s, Asian and mixed API communities constituted the largest immigrant groups in the country, with the Filipino community being one of the largest in the Pacific Northwest. 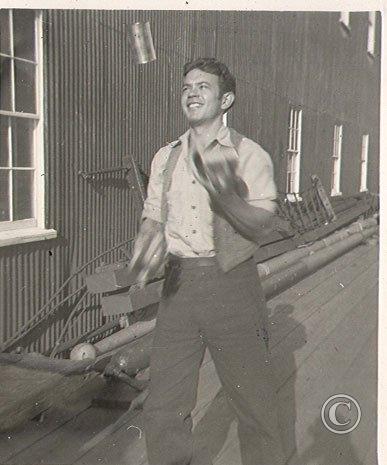 A Filipino cannery worker juggles cans of salmon in Alaska. 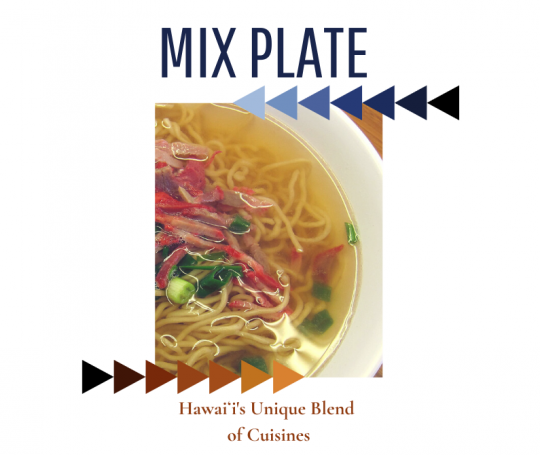