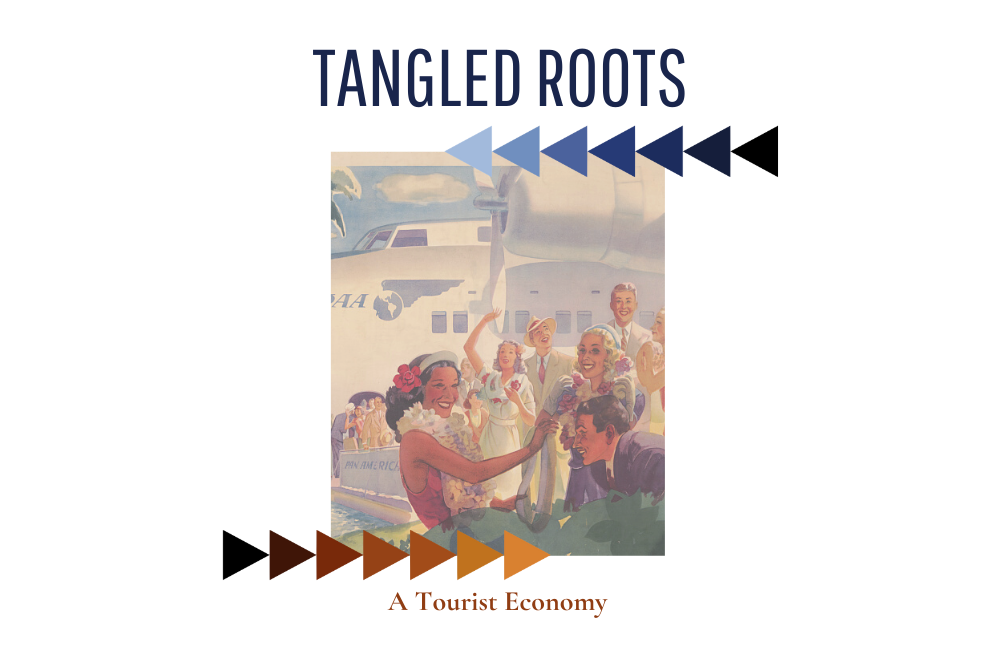 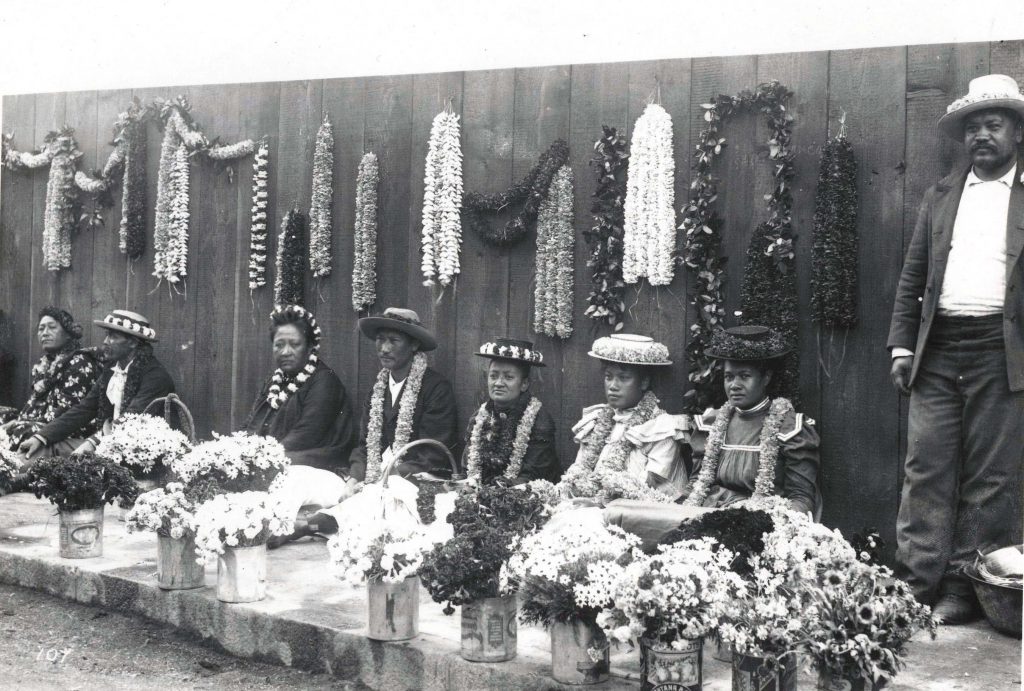 Native Hawaiian lei makers sell their lei to arriving tourists at the turn of the 20th century, possibly at a steamship dock in Honolulu.

Tourism as seen in Hawaiʻi today has it roots dating back to the late 19th century, when outside influences were changing the political, economic, and cultural dynamics in the Hawaiian Kingdom. Many factors led up to the boom of the tourism industry in the 1900s, including, but not limited to: 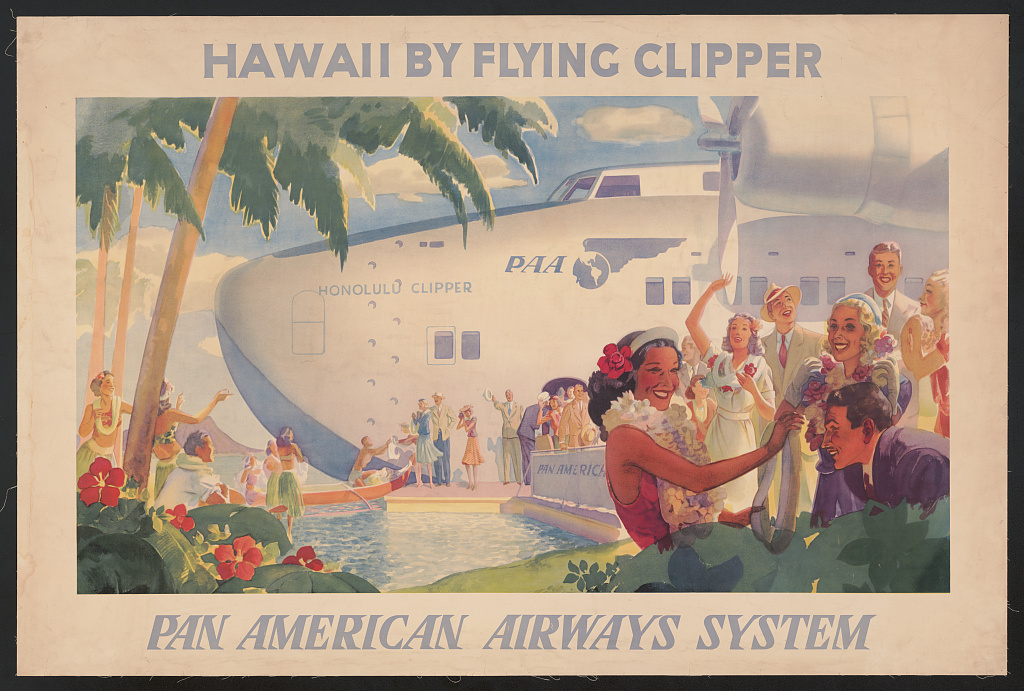 This 1938 lithograph advertises Pan American Airways’ passenger service from San Francisco to Honolulu, which took 21 hours to complete and cost $360 at the time. Posters like these were highly popular and used throughout much the 20th century to sell a commodified image of Hawaiian culture to American tourists—an image which did not portray the reality of Hawaiʻi’s “behind the scenes” racial politics.

...Hawaiian culture is constantly in danger of commercialization. Despite their real expression of our culture, the hula and Hawaiian language are easily incorporated into, and transformed by, tourist promotions, hotel festivities, and the ideological sea of commercialism...

The first hotel in Waikīkī was built in 1901, spurred by the early roots of colonial tourism that had already been established in Hawaiʻi several decades prior. To further commercialize and expand the visitor industry, a tourism promotion bureau was established in 1903 which sponsored lecture tours to potential visitors on the west coast. As commercial passenger service capacities increased and more Western monies were funneled into the promotion of a “Hawaiian holiday,” the number of tourists in the islands grew rapidly. In the year leading up to the bombing of Pearl Harbor and US entry into WWII in 1941, annual tourist counts totaled more than 31,000.

By the second half of the century—despite disruptions brought on earlier by the Great Depression and World Wars I and II—tourism and land speculation grew exponentially to replace sugar and pineapple plantations as Hawaiʻi’s primary economic resource. Today, over a fifth of Hawaiʻi’s economic revenue is generated by the local tourist industry. 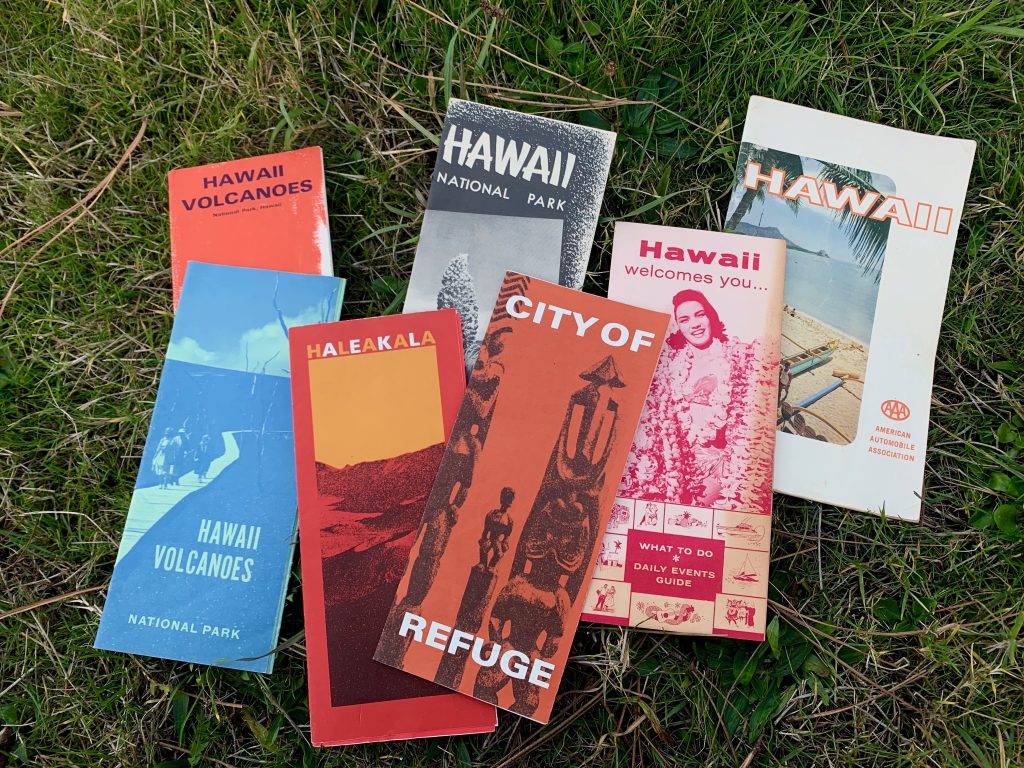 A handful of tour guides and pamphlets from the 1950s and 1960s, found at a local estate sale in Portland, Oregon.

Tours Away From Hawaiʻi 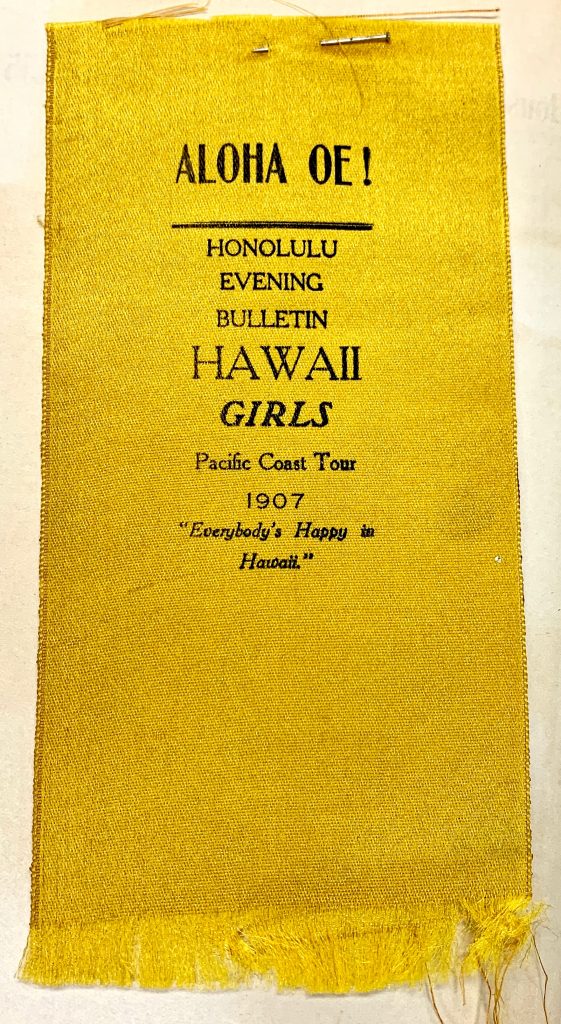 A yellow satin commemorative ribbon like this would have been worn by the girls of the 1907 Pacific Coast Tour. The group was chaperoned by Edyth Tozier Weathered and included Rose Aloiau, Emma Rose, Hester Lemon, Hattie L. Soffrey, Bernice Dwight, Lillian Mundon, California Lucas, Kate Saddler and Daisy Todd.

By the early 1900s, commercial steamships were carrying hundreds of passengers both to and from Hawaiʻi. In order to further advertise for tourism, multiple agencies and organizations sponsored tours of Kānaka performers or selected groups, especially young girls, to visit major landmarks and cities on the American west coast via steamship.

One group of nine Hawaiian girls sponsored by the Honolulu Evening Bulletin in 1907 is well documented in many urban newspapers—telling of the interest the tours generated amongst American cities in today’s California, Oregon, Washington, and British Columbia.

The girls—educated and well-versed in Western colonial etiquette—were carefully chosen as “representatives of the best families in the islands,” in order to sell the Hawaiian image to Western audiences in a palatable, intriguing manner. 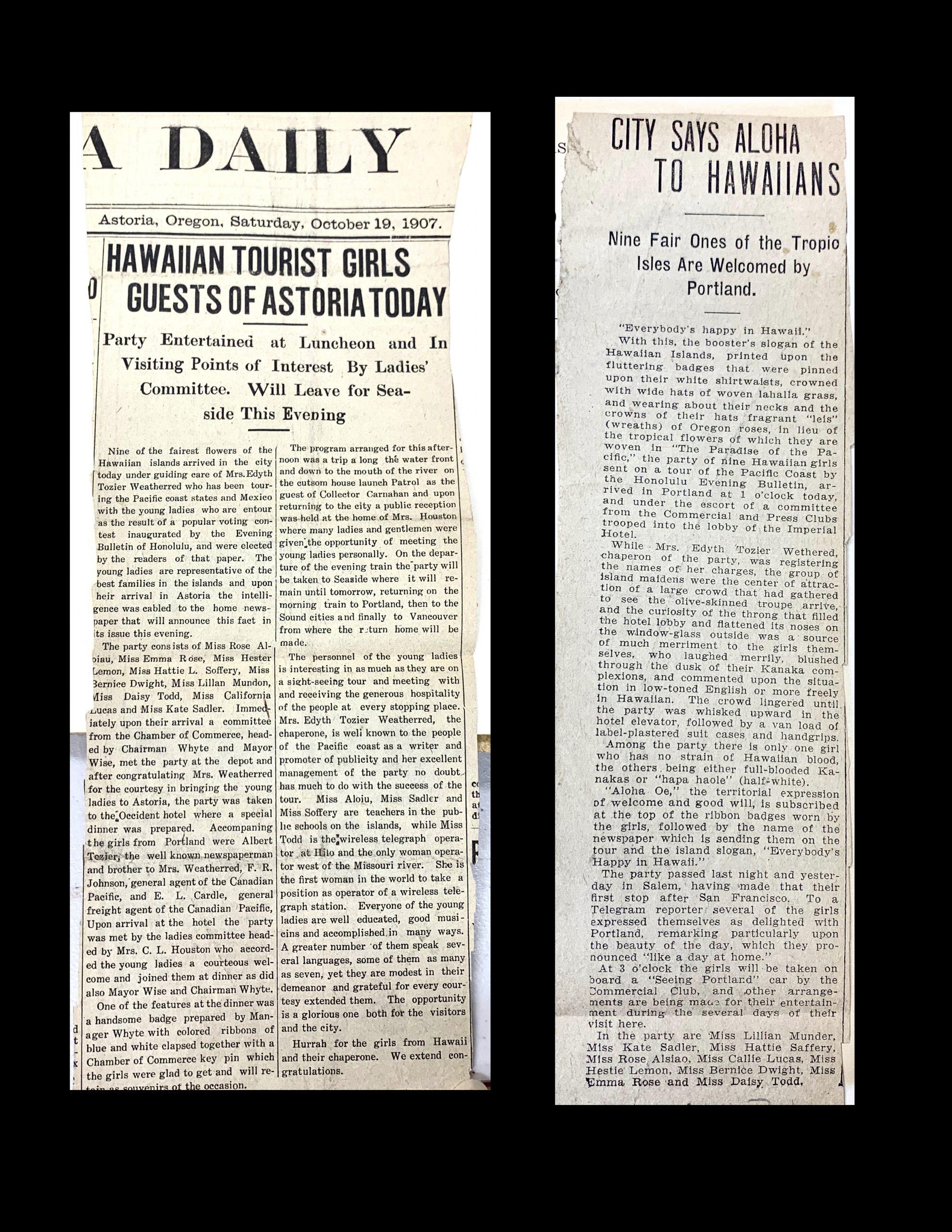 Newspaper clippings from a personal scrapbook owned by chaperone Edyth Tozier Weatherred (a prominent Portland figure) detail the 1907 visits of the Hawaiian girls in Portland and Astoria. The articles give brief and often exoticized descriptions of the Kānaka.

Other Kānaka toured the west coast in the early 20th century as performing musicians and dancers. These performers played a complicated role in representing Hawaiian culture to foreign audiences, a dynamic which would ultimately commodify their native music and dance through tourism. Hula dancers were not permitted to dance traditional hula kahiko after the missionaries deemed it an “abomination,” so musicians were paid to perform mostly Westernized compositions. 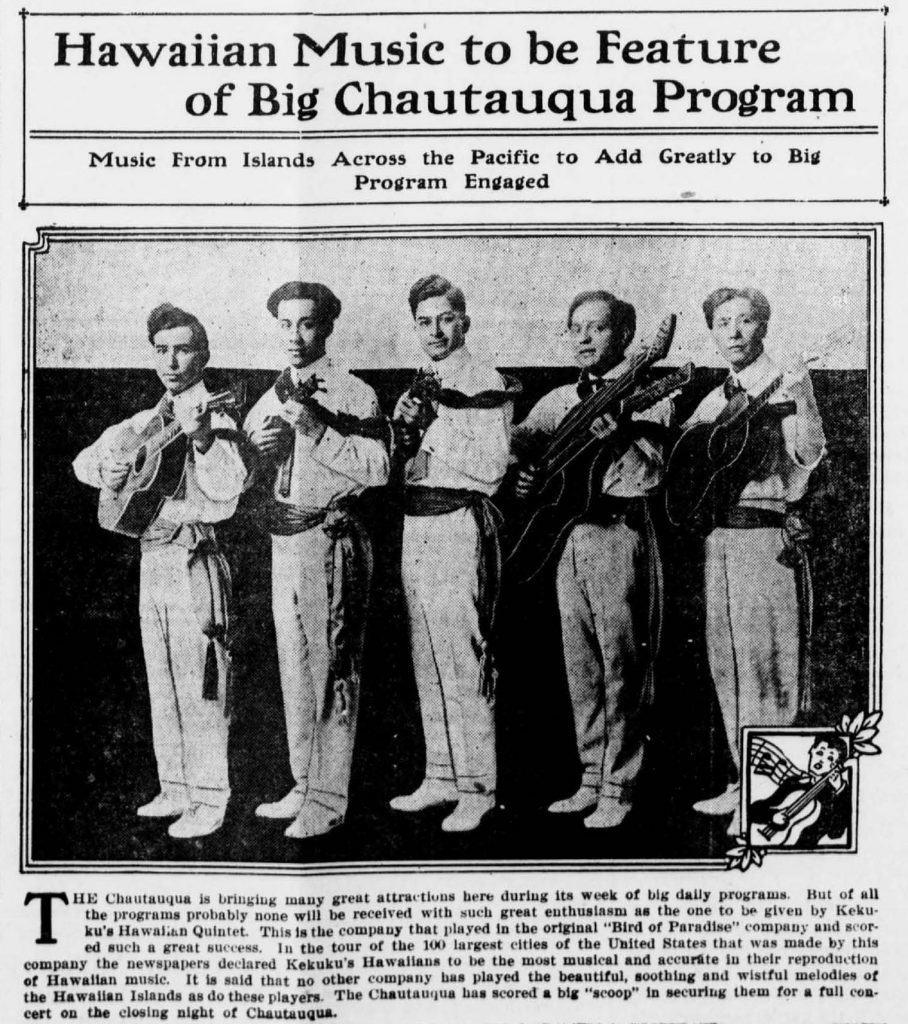 A 1916 article from The Colville Examiner advertises a performance by Kekuku’s Hawaiian Quintet, which was led by renowned inventor of the steel guitar Joseph Kekuku (far right). The group made numerous stops on a tour across the continent and spread the iconic sound that many Americans still attribute to a Hawaiian tourist experience. 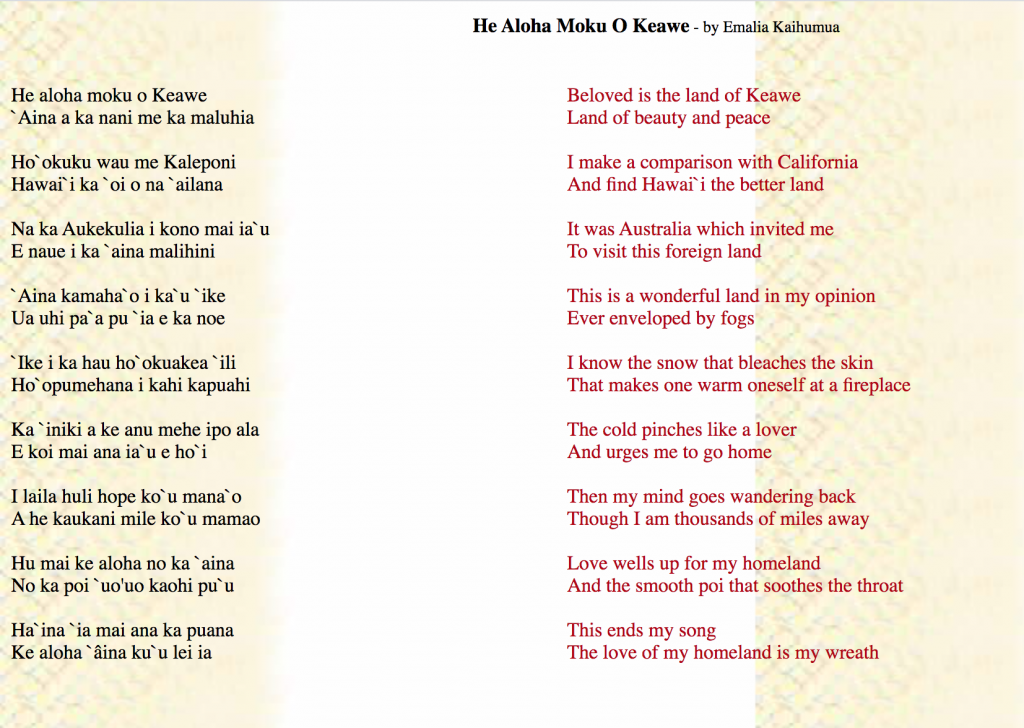 A song by “Sweet Emalia” Kaihumua, a performer and composer who toured the west coast to raise interest in visits to Hawaiʻi. She wrote this mele (song) longing for her home on Moku O Keawe (‘Big Island’) in 1894 after a visit to California during the colder winter months. Here, “Australia” refers to the name of the steamship that carried her abroad.

After over a century of modern tourism controlled overwhelmingly by non-Hawaiians, the tourist commodification of Native Hawaiian culture and lands has come to the forefront of issues affecting Kānaka Maoli today. Over the years, the annual number of foreign visitors has approached 10 million and Hawaiʻi’s economy has become increasingly dependent on the tourist service and hospitality industries as a result. Throughout history and continuing today, this dependency has had numerous adverse effects on the Kānaka Maoli people, including the displacement of Hawaiians from their lands, rising costs of living leading many to leave the islands (often to places along the west coast of Turtle Island), the misrepresentation and tokenization of Native Hawaiian culture, damage to ecologically sensitive biomes, and beyond.

As these practices have continually been proven unsustainable on a local and global level—especially during a global Coronavirus pandemic—awareness and advocacy around these issues are picking up traction amongst Native Hawaiian communities both in Hawaiʻi and abroad. 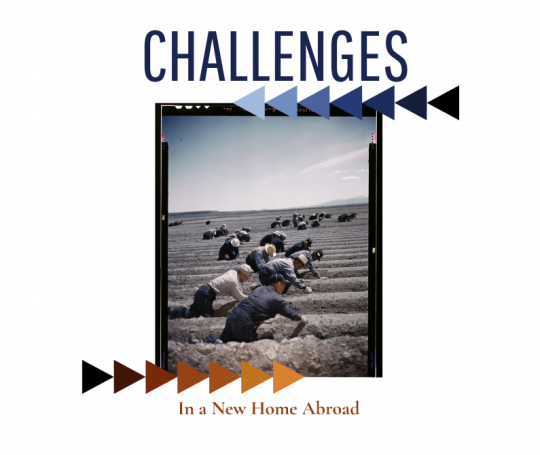 Next History Page – Challenges in a New Home Abroad