Sum of its Parts by Zeph Fishlyn

The participation window for Sum of its Parts is now closed. Here are the results of this collaborative photography project.

We invited participation in Sum of its Parts, a collaborative photo scavenger hunt capturing the multifarious futures of gender! We created five no-contact porch-pickup locations around Portland, each with a disposable camera and a list of crowd-sourced photo prompts suggesting possible genders. Participants could “check out” a camera, then snap a photo that reflects one of the prompts on the list, or invent your own. Stations were in action from July 9 through August 9. We are developing each camera in preparation for sharing the resulting photo collage in the Gender Euphoria virtual exhibition.

By putting both photo prompts and visual responses into the hands of anonymous strangers, Sum of its Parts exercises the collective imagination and a trust in irrational convergences to open up possibilities in trying times. 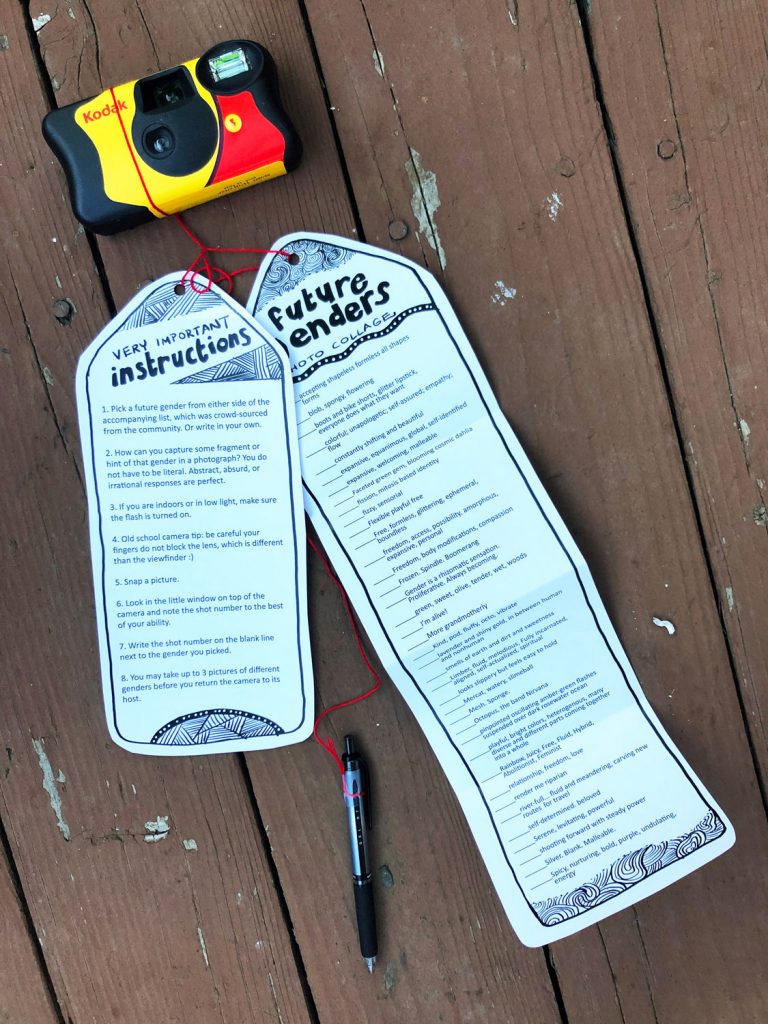 1. Pick a camera station convenient to you. Contact the host and arrange a no-contact camera pick up. Hand sanitizer and alcohol wipes were provided for participants’ use.

2. Pick a future gender from either side of the accompanying list. Or write your own and add it to the list.

3. How can you capture some fragment or hint of that gender in a photograph? You do not have to be literal. Abstract, absurd, or irrational responses are perfect. First thought, best thought.

5. Read the shot number in the little window on top of the camera. Write that number on the blank line next to the gender you picked.

6. You have 3 hours and can take up to 3 pictures of different genders before you return the camera to its host.

Zeph Fishlyn (they/them) is a multidisciplinary visual artist and activist dedicated to personal and collective storytelling as nonlinear tools for reinventing our world. Zeph’s public projects, drawings, objects and installations nurture alternative narratives by questioning, dreaming, distorting, celebrating and demanding. Their most recent work explores sources of collective and personal resilience as foundations for action in the face of overwhelming circumstances.