It Breaks My Heart —

I’ve Always Had a Lot of Rage —

Written by youth who participated in the 2016 walkouts; performed by Joaquin Lopez

We Are People, Too —

When a young human can no longer endure the injustice and inequity they are made to bear, they break and everyone in the community suffers. To heal this communal wound, we must listen to their story, believe them, and walk beside them, unconditionally. This is the gift I have been given with #StandUpFG, the opportunity to listen to their stories, create songs, and be part of the healing journey. #StandUpFG is a testament of valor, standing up to injustice, and youth activism demanding being seen as human. It’s been an honor to collaborate with youth and transform their call to action into song.

Joaquin Lopez is a performing artist, musician, and mental health counselor whose work is grounded in personal transformation, self-expression, and Latino Queer identity. As an actor and performer, he has worked with theatre companies: Milagro, Sowelu, Hand2Mouth Theatre, BagNBaggage, WP Theater in New York, and the Oregon Shakespeare Festival. In 2019, he released UNIVERSO, an electro-pop album that pays homage to his coming-of-age as a gay man. Joaquin served as the Arts & Culture Manager and the Manager of Leadership Development during his time at Latino Network. In 2021, he was appointed by city council as Creative Laureate for the City of Portland. 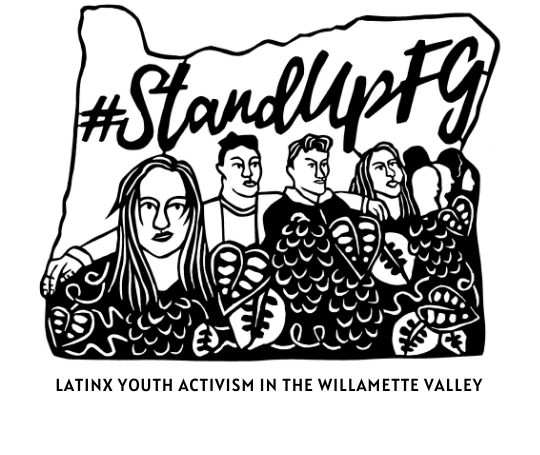