This IS Kalapuyan Land: Broken Treaties 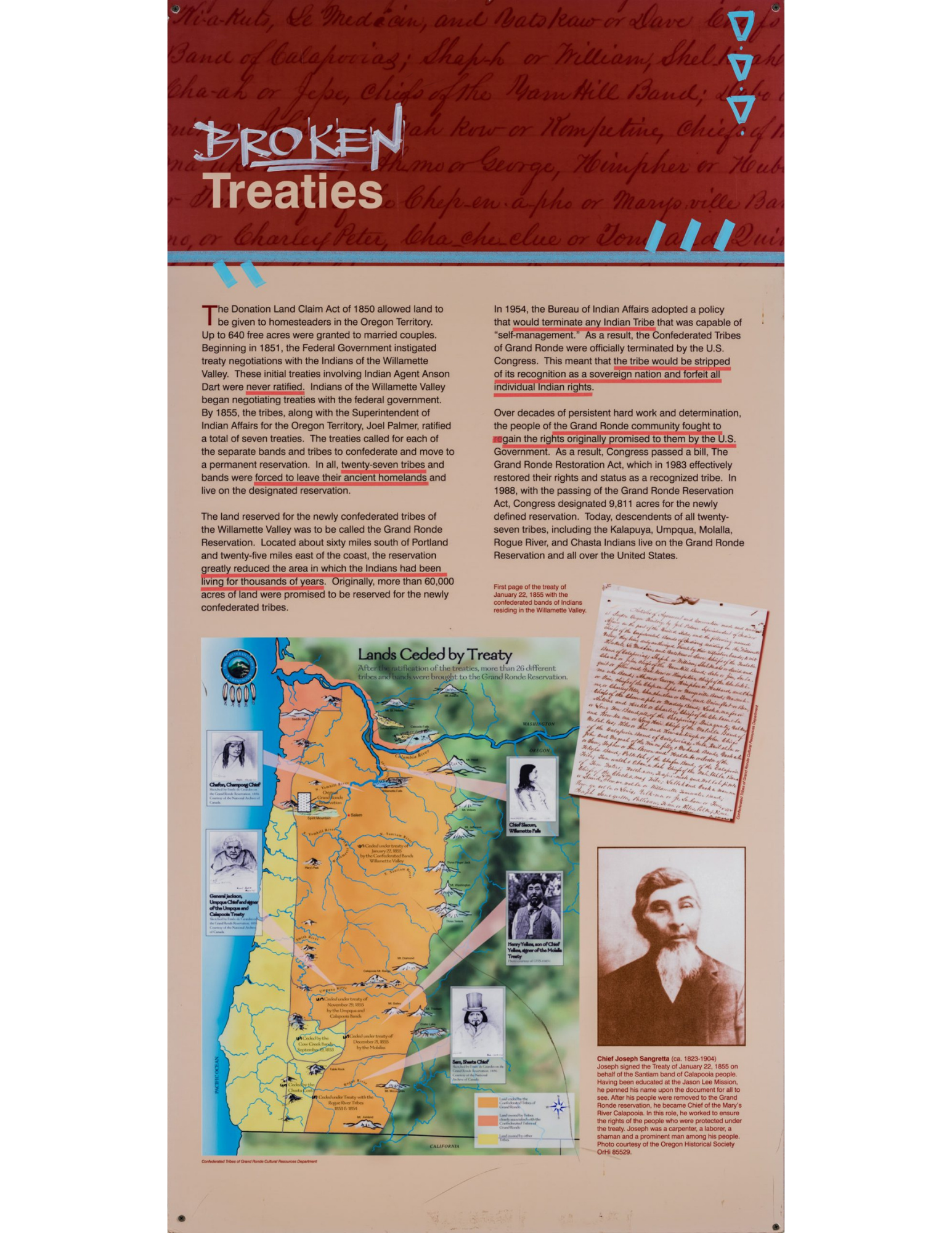 The Donation Land Claim Act of 1850 allowed land to be given to homesteaders in the Oregon Territory. Up to 640 free acres were granted to married couples. Beginning in 1851, the Federal Government instigated treaty negotiations with the Indians of the Willamette Valley. These initial treaties involving Indian Agent Anson Dart were never ratified. Indians of the Willamette Valley began negotiating treaties with the federal government. By 1855, the tribes, along with the Superintendent of Indian Affairs for the Oregon Territoty, Joel Palmer, ratified a total of seven treaties. The treaties called for each of the separate bands and tribes to confederate and move to a permanent reservation. In all, twenty-seven tribes and bands were forced to leave their ancient homelands and live on the designated reservation.

The land reserved for the newly confederated tribes of the Willamette Valley was to be called the Grand Ronde Reservation. Located about sixty miles south of Portland and twenty-five miles east of the coast, the reservation greatly reduced the area in which the Indians had been living for thousands of years. originally, more than 60,000 acres of land were promised to be reserved for the newly confederated tribes.

In 1954, the Bureau of Indian Affairs adopted a policy that would terminate any Indian Tribe that was capable of “self-management.” As a result, the Confederated Tribes of Grand Ronde were officially terminated by the U.S. Congress. This meant that the tribe would be stripped of its recognition as a sovereign nation and forfeit all individual Indian rights.

Caption on upper right image: First Page of the treaty of January 22, 1855 with the confederated bands of Indians residing in the Willamette Valley.

Caption on lower right image: Chief Joseph Sangretta (ca. 1823-1904) Joseph signed the Treaty of January 22, 1855 on behalf of the Santiam band of Calapooia people. Having been educated at the Jason Lee Mission, he penned his name on the document for all to see. After his people were removed to the Grand Ronde Reservation, he became Chief of the Mary’s River Calapooia. In this role, he worked to ensure the rights of the people who were protected under the treaty. Joseph was a carpenter, a laborer, a shaman, and a prominent man among his people. Photo courtesy of the Oregon Historical Society OrHi 85529.

Names and Treaties on Lands Ceded by Treaty map:

Chafon, Champoeg Chief — Sketched by Emile de Giradin on the Grand Ronde Reservation, 1856, Courtesy of the National Archive of Canada.

[un]ceded under treaty of January 22, 1855 by the Confederated Bands Willamette Valley

General Jackson, Umpqua Chief and signed or the Umpqua and Calapooia Treaty — sketched by Emile de Giradin on the Grand Ronde Reservation, 1856, Courtesy of the National Archive of Canada.

[un]ceded under the treaty of November 29, 1855 by the Umpqua and Calapooia Bands

Sam, Shasta Chief — Sketched by Emile de Giradin on the Grand Ronde Reservation, 1856, Courtesy of the National Archive of Canada. 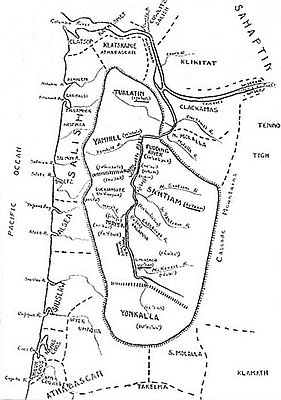 Learn about the Kalapuya Treaty of 1855.