When Rivers Were Trails

When Rivers Were Trails is a 2D adventure game by This IS Kalapuyan Land artist Elizabeth LaPensée in the gameplay style of the popular Oregon Trail computer game. Adults and children alike will engage with history from an Indigenous perspective and consider the role that point of view plays in how history is taught and talked about. Free to download and play!

An Anishinaabeg in the 1890’s is displaced from their traditional territory in Minnesota and heads west to California due to the impact of allotment acts on Indigenous communities, facing Indian Agents, meeting people from different nations, and hunting, fishing, and canoeing along the way as they balance their wellbeing.

When Rivers Were Trails for Mac or PC

When Rivers Were Trails for Apple Ipad

“THE WORK THAT GAVE ME THE MOST PAUSE, however, was Elizabeth LaPensée’s game When Rivers Were Trails.

When Rivers Were Trails is a variation on the educational game Oregon Trail, which introduced American elementary school students to the routes, existence, and hardships of the thousands of settlers who headed west in covered wagons toward Oregon. LaPensée’s game uses the same premise – the player is traveling somewhere and needs to make decisions about routes to take, ways to procure food and supplies, and how to avoid danger – but instead of the players impersonating a pioneer, they take the point of view of an Indigenous person being forced from their land by arriving white settlers.

…I can honestly say it never once occurred to me until I played When Rivers Were Trails the extent to which the game Oregon Trail privileged the singular perspective of white settlers and normalized it as the only narrative worth studying or learning about.” -Laurel Reed Pavic, in Who’s Land Is It Anyway? Oregon Artwatch, January 8, 2020. 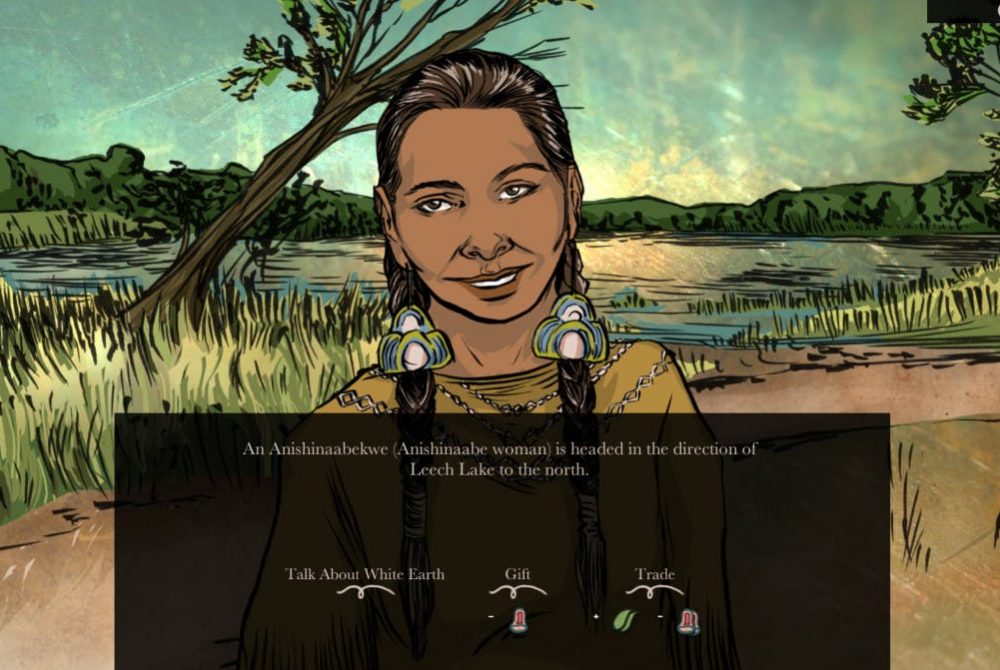 Suggestions for playing When Rivers Were Trails as home learning: